Sodom – 40 Years At War – The Greatest Hell Of Sodom [Compilation] 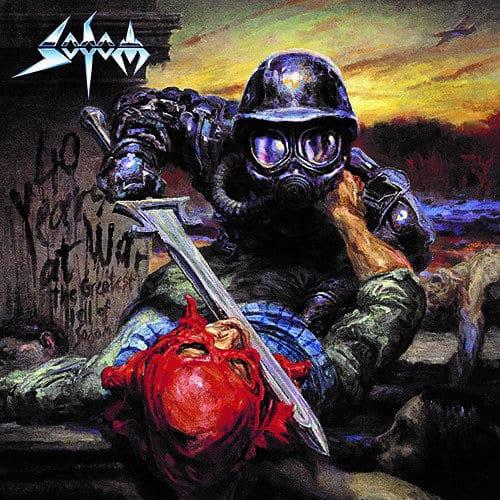 Whether you like Heavy Metal or Black Metal, Thrash Metal or Death Metal, there is no way that your favourite bands from each of those genres has not been inspired by Germany’s Sodom. They are often mentioned in the same breath with Kreator, Destruction and Tankard, together forming the Teutonic Four, and in that composition responsible for an unimaginable amount of followers, both in fans and musicians who have the foursome as their main inspiration. Especially in Germany, these four are still immensely popular and single-handedly (although we should then add Helloween here for completeness) responsible for kickstarting Europe’s biggest metal scene.

All four of these iconic bands started in 1982 and are still active without interruption, which is a quiz-worthy observation to say the least. Well, if you zoom in a bit further you will find that Destruction went through a turbulent period in the 90’s during which figurehead Marcel “Schmier” Schirmer had left the band and the albums are of a somewhat meagre quality (understatement), Kreator also had a somewhat wobbly musical policy in the mid-90’s resulting in a few less successful albums and that Tankard, musical quality aside, actually put themselves permanently at a disadvantage with their beer-and-humour concept, which in fact only works well in Germany. Although Sodom too has its better and lesser albums, you can definitely conclude that they have stayed true to their musical course more than the other three and have managed to maintain that with reasonably stable quality.

Started in 1982, that means the band is celebrating their 40th anniversary this year. Incredible really. And, how do you celebrate such a thing? Sodom must have thought it would be a good idea to make some kind of compilation album with one track from each of their albums, because that’s what you get with ’40 Years At War – The Greatest Hell Of Sodom’. So you are presented with 17 songs, including one from their most iconic release with equally iconic cover art: ‘In The Sign Of Evil’-EP from 1985. While I personally probably wouldn’t make half the same choices out of all the possible songs, this collection gives an excellent picture of what Sodom stands for, and it becomes all the more clear that there was hardly any shifting in style. Certainly after ‘Persecution Mania’ (1987), the band actually barely moved from its place – an achievement in itself. They are forgiven the sporadic lapses in their vast discography, for instance, the choice of a song like ‘Jabba The Hut’ really cannot be explained other than by a spontaneous bout of total stupor. Of course, in a legacy of a stunning 40 years, it is impossible to avoid the occasional miss, but at least we can thank The Executioner that Tom Angelripper for the most part has kept his lame beer-and-nonsense for his solo career.

Nothing but praise and pure appreciation for this band. They are arguably the most influential band from the Teutonic Four and it is therefore great fun to listen to all these songs in succession like this. But, the fact that they’ve chosen to re-recorded all of them, really wasn’t their brightest idea. With the later songs it doesn’t really have any impact, but with the older songs it is a mortal sin. I personally have never heard an album of re-recorded songs that surpasses the original recordings. And, frankly put, this is just another perfect example. All the songs from ‘Tapping The Vein’ (1992) and earlier are completely stripped of their soul and energy in this way. Most painful are ‘After The Deluge’ (from ‘Obsessed By Cruelty’, 1986) and especially ‘Sepulchral Voice’ (from ‘In The Sign Of Evil’, 1985). Without wishing to detract from the band and their importance to the development of extreme metal, I can’t get my head around the fact that they actually did this. They also committed a similar mistake back in 2007, with ‘The Final Sign Of Evil’; in 1985, ‘In The Sign Of Evil’ was meant to be an album, but the label wasn’t sure about it’s commercial potential, deleted a few songs and it became the now-famous EP, with ‘The Final Sign Of Evil’, the band released the originally intended set of songs, with the dropped songs included, all re-recorded. Awful. And again, on this new compilation album, it really sounds like the total abolishment and desecration of a much beloved monument. It really feels like remaking the Mona Lisa with Photoshop.

Their musical influence soon began to wane after ‘Persecuction Mania’. Being completely wiped off the stage by their support act, the then relatively unknown Sepultura, on their European tour for ‘Agent Orange’ marked the equally symbolic and dramatic low point. But that takes nothing away from Sodom’s musical historical importance. Whether you listen to Mayhem’s ‘Deathcrush’ or the many bands from today’s Black/Thrash Metal scene, you simply can’t ignore Sodom’s relevance over the years, even today. Even if not everything on this compilation comes off equally well, the fact that the band has been around for 40 w00ping years is definitely worth celebrating. I would almost say: on to the next 40! (FelixS)