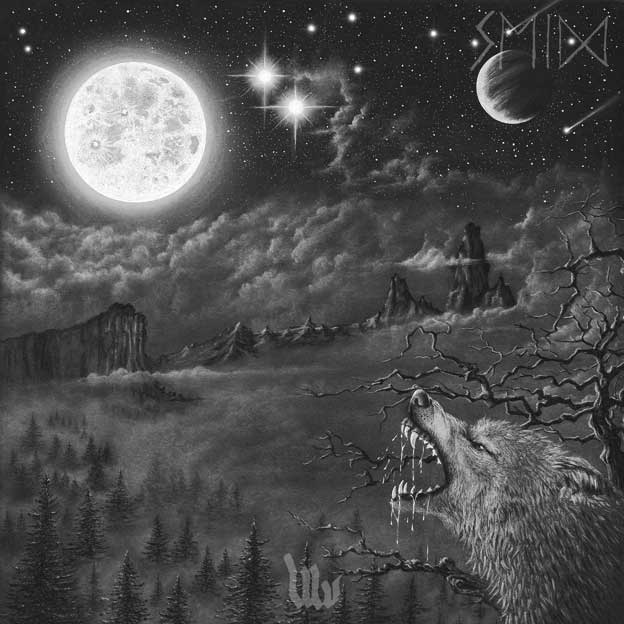 There I was, snooping through the VM Underground Fanzine older promos list when I stumbled upon a band I knew. Earlier this year I got to review ‘Svartr sól’, the fourth studio album from Swedish Black Metal band Seid, and that album ended up in my top albums of the year list. So there amongst the promos nestled away just minding its own business was ‘Ulv’, the third full length opus of Seid. Well what was I to do?

Released back in 2019 on LP through Urtod Void, the same label incidentally that released this years album, ‘Ulv’ comes adorned in wonderful cover art that is reminiscent of many pieces that have covered many Satanic Warmaster albums over the year.

Opening track ‘Monolith’ truly does have a monolithic sound. As rain pours in the background and thunder peels across the nights sky, Seid let loose with intensive grinding guitar tones and cautious, building drumming which increases in bombast and aggression as the band begin to move through the gears. As the track fully expands into a grandiose and colossal sounding beast, harsh grating vocals sound out powerfully from the gloom and punishing bass tones bolster an already impressive and passionately melodic opening.

Seid have more tricks up their sleeve as the album progresses, such as the spontaneous bouts of carnage strewn savagery that they unleash during tracks such as ‘Spider in the Web of Urd’, or the direct tones of ‘A Gift for the Wanderer’, which create a superb juxtaposition between the bands flowing, thought provoking style and their more pulverising tendencies. However, the bands lyrical concepts which focus heavily on the bands Viking heritage, and the rune magic and folk lore that entwines itself around said heritage, always remain breathtakingly concise and a pleasure to read. they give a real insight into a band who take their art very seriously and put in a lot of time learning about what they instil into their creation.

A slower, more atmospheric track, ‘To Stain the Fields of Vigridir’ is easily one of my favourites on the album, though it is hard to choose from the list of equally impressive tracks. I’m also rather taken by the whimsical, chanted vocals and haunting ambient undertones of ‘Magnum Tenebris Die’. But in truth, the whole album is powerfully emotive and rich in folkloric splendour.