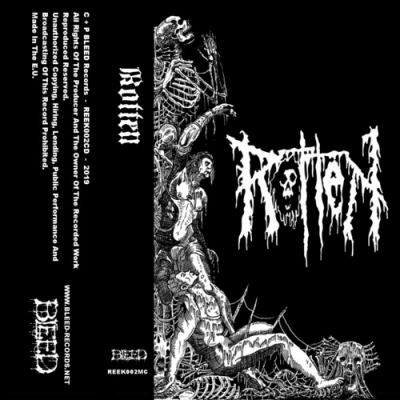 William Shakespeare once wrote the line ‘Something is rotten in the state of Denmark’, and as well as that may have been for the day, I’d like to change that now and forever, because something is indeed rotten, but it’s coming from France. Yes, this pack of escapees from the very pits of hell themselves carry quite the stench, and by fucking Christ is it massive.

This is Death Metal, and it’s about as putrid as you can get. Like watching a body slowly decay in the blistering sun, you can feel the bile rise in your stomach, the stink almost overwhelmes you, but fuck it is fascinating all the same. Somehow they manage to keep it all intelligible, but it’s not far off sheer insanity. Death grunts galore and a voice that is at times reminiscent of a certain Mr Tardy of Obituary fame at times, a gurgling fucking nightmare, horror incarnate, the death of worlds. Every utterance sheer utter vile hatred, and I cannot get enough of it.

Guitars that produce riffs that sound like a chainsaw dripped in fucking solid concrete, at times you can hear the strings almost squeal in agony under the torture they are enduring. The bass itself when isolated is enough to convey the feeling one must get the moment your bowels loosen when you die, nothing could possibly sound lower that exists on this earth. Black Holes would listen to this album if they were sentient just to feel better about the fact that they will eventually destroy all around them. Take track five “Floating Among the Dead Celestial Bodies” as a prime example of this.The instruments become a weapon of mass destruction. Every song is terror personified. Right from the ugliness and blasting frenzy of track one “Viscera Nebula” through to, the last song “Til Death”, which just so happens to BE an Obituary cover, this pack of French bastards have their foot right on your fucking throat, and they are not gonna take it off until you ultimately expire. Highlight’s? “Umbilical Cord of the Purulent Planet” is the shit, trust me, but the whole Goddamn thing is a gigantic monstrosity.

This is the ducks guts, the bees knees, and all the best things in Death Metal that you never knew you needed until now. Do yourself a favour. GET THIS!! (The Great Mackintosh)