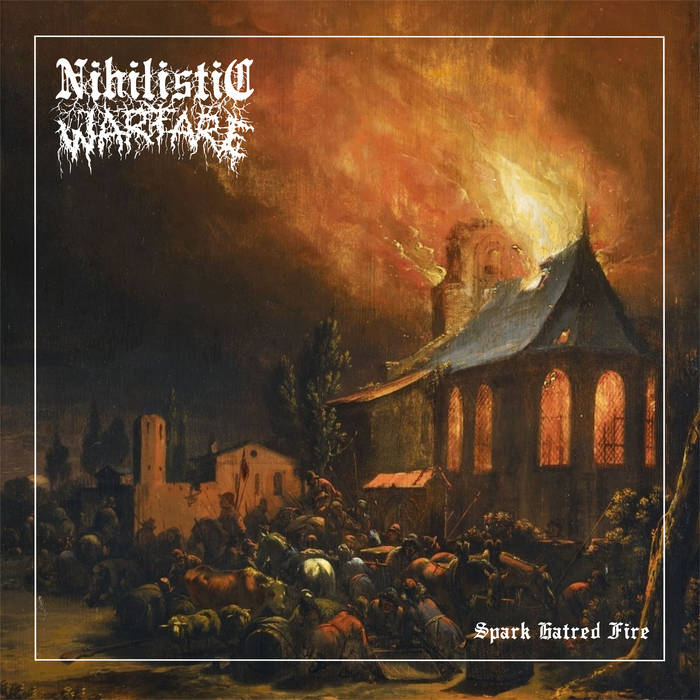 ‘Spark Hatred Fire’ is not only a debut album, but in my eyes a serious album of the year contender, and it all starts with the wonderful visual of a burning church blazing high into the nocturnal darkness. Having formed in 2019, Nihilistic Warfare of Germany waited until now to unleash upon us their debut opus, and I imagine that this deathly trio spent the Pandemic period honing and perfecting their craft, the results of which are now out there for us all to bask in.

And bask I certainly am, in the clean and crisp production which allows every note, chord and growl to flourish. Nor is this album typical of the Death/Doom genre, and whilst the bands sound has a deep layer of darkness, they don’t mire they’re entire sound within in it, instead producing engaging guitar leads that soar forward powerfully, supported by sturdy bass lines and solid, old school drumming. It’s in the song-writing that Nihilistic Warfare really excel though, and each of their seven tracks has a great deal of depth to the melodies, whilst retaining an overall heaviness. Because of these reasons the album is pretty catchy in places and the guitar leads have a rolling quality to them, like wave after wave of bleak sounding washing over you, a characteristic of the deeply anti-religious ‘No God, No Compromise’ or the hate fuelled album title track ‘Spark Hatred Fire’.

Anti-religious sentiment maybe rife on this album but this is no mere stab at the church. Nihilistic Warfare are deeply influenced by the writings and work of one Friedrich Nietzsche, and this lends far more depth to the bands vitriolic utterings. ‘Spark Hatred Fire’ is a stunning debut album and more reveals itself through even repeated listen. (Marksson)