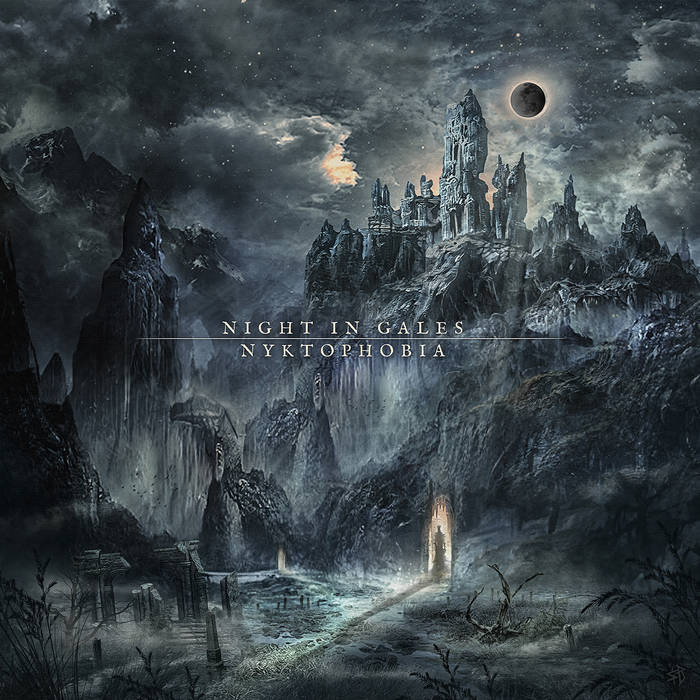 At the back end of 2021, two German Melodic Death Metal bands formed an alliance and revelled in their collective love for dark fantasy. Voerde/Cologne based Night in Gales have been around for quite some time, their inception being all the way back in 1995. In that time they have unleashed seven full length albums but this is their first ever split release. Comparatively speaking, Datteln, North Rhine-Westphalia based Nyktophobia (an irrational or disproportionate fear of night or night-time darkness) are the new kids on the block, having twenty years less tenure than their release mates. That said, the band have put out three full length releases since their 2015 inception. As you can see, this Apostasy Records released opus comes adorned with spectacular artwork that really ties into both bands penchant for Dark Fantasy themes.

Night In Gales kick things off with the first of their two tracks; the surprisingly aggressive ‘The Dead Half’ which espouses the darker, dead half of an organism, or maybe even a society as it takes over the living and plunges everything in the black. Night In Gales have a very melodic aspect as you’d expect, but also thundering, raw growling vocals that powerfully belt out the lyrics whilst being accompanied by meandering and intricate guitar leads, a crashing symbol happy drumming style and a great deal of surging riffs. The bands second track ‘Silenced by Stars’ starts with a more thoughtful nuance but soon unleashes a spectacular and frenetic tirade of angry yet harmonious guitar rhythms and furious beats. Two fast and very powerful tracks that don’t stick around. Night In Gales make their point and move on.

‘Winter Assault’ gets the Nyktophobia portion of evens underway with a Nightwish like introduction that gives way to cautious yet surging riffs that build quickly to crescendo before unloading a spectacular volley of marauding and bombastic drumming, highly technical and intricate guitar leads and strained vocals. ‘Winter Assault’ truly lives up to its name by furiously rampaging through its near six minutes of length, with just a few moments of slower, darker melody towards the end of the song. A very intense effort and one that increases with power and force as it progresses. Things come to a close with the much shorter yet no less potent ‘Flight of the Phoenix’. In truth I’m not much into Melodic Death Metal but fancied doing this review to keep things varied. I have to say, these two bands could make me a convert!