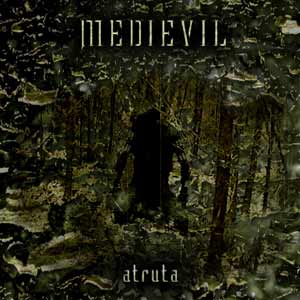 The black metal outfit Medievil was formed in late 1998, at that time however, the band was more death/heavy/thrash oriented. It wasn’t until 2001, after a split between Medievil, with drummer Bes Trefoil on one side together with Xvost on bass; and The Tzar on the other side, consisting of the other band members that the drive altered to a more black metal oriented approach towards the music. With Trefoil taking on all of the songwriting, and playing all the instruments, whereas Xvost fulfilled his bass-duties. The Tzar disbanded shortly after the split, whereas Medievil were reining Belorussia. The year 2006 saw the release of “Atruta”, Medievil’s first full-length release. “Atruta” is a work of “decadent astral black art”, that holds the power to intoxicate your mind with its underground high standard black metal. (MathijsH)