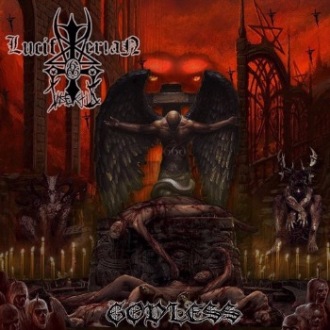 One man project Luciferian Insectus was raised by Darren Peterson in Florida, US and is now located in Amsterdam, Netherlands. The man released 2 demos and 2 full lenghts from 2013 to 2016. Apollyon Entertainment is now re-releasing the full lenghts prior to the new album which will see the light of day this year. “Godless“ and its predecessor “Zal Van Beherit“ are excellent slabs of Black Death if you like Behemoth, mid period Belphegor and some occasional Sceptic Flesh. A lot is focused on rhythm patterns on guitar and drums with epic structures and melodies. Darren kills it on every instrument, showing that he is not only capable to play everything smooth and on a high level, but also being a good songwriter. He keeps the songs interesting thanks to his ability in switching speeds so easily and doing style transitions effortless while still keeping it true to its sound. The songs are more focused on atmosphere and flow instead of speed (“Godless” is a very good example of that) and his vocals range covers every territory. He`s got all the ingredients for a very versatile Extreme Metal album which perhaps only needs a “better” or more modern production to be on par with the biggest. Shredmaster like he is, there is also a lot of technical stuff being thrown in between the more tremolo picked chords or staccato riffs (some cool Internecine riffing here for example). Some hyperblast sections are close to Belphegor (“Lucifer Incestus”, maybe a fan of it?) are just great in my opinion, as well as the slow melodic parts that could have fit on “Walpurgis Rites” or “Bondage Goat Zombie”. “Zal Van Beherit” has a far more aggressive approach as it has a bigger amount of classic nineties Black Metal in it. 2 albums I think Black/Death fans should give it a listen, since both are well done by this man. (DPF)