Incarnated – Choirs Of The Dead [Compilation] 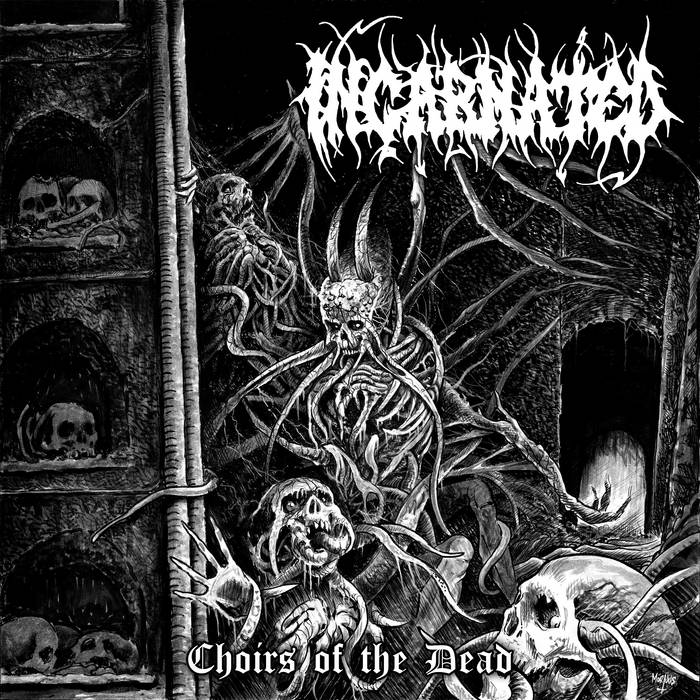 From a world as vital, innovative and musically creative as the early Swedish Death Metal scene have sprung many bands that have been of unimaginable musical value to the development of the genre. The early adapters soon gained many followers who often pushed the musical template to new heights and extremes, for instance by adding other influences, speed or melody. This produced many gems, some of which gained great fame whereas others were too late or missed the boat for other reasons. In any case, to this day we still enjoy that spontaneous burst of buzz-saw violence from Sweden – there are still releases passing us by at VM-Underground almost on a daily basis that pay homage to that beloved signature sound.

My assumption is that if you are reading this it is not necessary to set out a full introduction to the Swedish Death Metal scene. However, an introduction to Incarnated is in order, as they are not among the group of bands that have made it to great fame. Neither is it a band I would classify under the ‘forgotten gems’-category. You would also think that with the sudden revival of the Old School scene from around 2010, all the ‘forgotten gems’ would have been made available again via labels like To The Death and The Crypt.

Graveless Souls Records and Grind To Death Records, however, thought otherwise and are giving Incarnated new life through this compilation of all the old work recorded between 1993 and 1999. With those years in mind, you could probably argue that they were also rather late, as those were the years when (Swedish) Death Metal was already considerably declining in popularity and giving way to the rapidly gaining Black Metal genre.

Despite there is quite a bit to enjoy on ‘Choirs Of The Dead’, it is impossible to argue that we have really missed out on anything all these years. We are presented with their music in chronological order. Starting with their 1993 ‘Wool-Gathering’-demo, an unreleased unnamed demo and then 1997’s ‘Choirs Of The Dead’-demo and another unreleased demo titled ‘Drowned In Blood’. Together they account for about 75 minutes of Old School Death Metal, but not really in the signature Boss HM-2 style. Some songs do lean a little bit more towards it, especially in the first and oldest part of the compilation, for instance, ‘Untouched’ sounds quite good and authentic. On the later demos, the band sounds a bit fuller and a bit more modern. It reminds me a little of Infestdead at times, but a lot less in-your-face and without the chunky production and great vocals. Recently, I was already little impressed by Henrik Andersson’s vocals on the latest Centinex EP, despite the fact that this was recorded years before, I think it can be concluded that he is just not the best Death Metal singer. All in all it is fair to say that this is only interesting for those who can’t get enough of Old School Death Metal or maybe from a historical perspective. But then again, there are hundreds of bands, both old and new, that are so much better and more interesting.