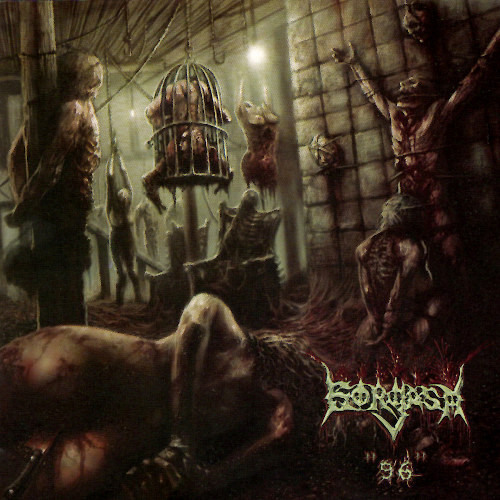 When it comes to the more brutal sort of Death Metal with a distinct technical slant, there are very few bands that come close to the ingenuity of Gorgasm from Indiana, USA. Their first two records, ‘Bleeding Profusely’ (2001) and ‘Masticate To Dominate’ (2003) are regarded as total classics. With very convincing live shows they further cemented their name into the minds of every fan of technical and brutal Death Metal. The band folded in 2008, only to return shortly after, but while the two albums that came after that short break are pretty decent, they lacked the brutal, savagery energy of the band’s earlier recordings. So, reissuing Gorgasm’s 1996 demo, originally released as a self-titled/untitled tape, should be seen as a very welcome addition to anyone’s Gorgasm collection.

While, for all the obvious reasons, you will not find many so called Brutal Death Metal bands on our pages, Gorgasm’s very first recordings definitely deserves to be mentioned. Not only because Gorgasm has been a band of great importance to that very specific genre of Death Metal, but also because it shows very obvious resemblances with a lot of other bands from around those mid 90’s that together changed the sound of the genre for good. Amongst those are obvious names as Cannibal Corpse and Suffocation, but there’s a whole lot of other bands that started to push the genre to new and unchartered territories. Gorgasm went hand in hand with genre peers such as Deeds Of Flesh, Vile, Dying Fetus and Disgorge; all of them had their roots in Death Metal, but were able to add more of their musical talent into the music than genre pioneers such as Massacre or Master.

This six-track demo, clocking just over 17 minutes, shows the potential the band already had as early as 1996. Their trademark dynamics, going from slow dragging pieces to all-guns-blazing blast beat frenzy and their unadulterated technicality, great basslines, fast chopping riffs that tend to change every few seconds are already present on these first recordings. Also the production is remarkably good for a demo recording, of course it does sound much rawer than the later studio-recordings for the albums that would follow, but it certainly does not take anything away from the listening experience.

Two of the songs would later reappear on the 1998 ‘Stabwound Inercourse’ mini CD on Pulverizer Records, but the other songs will be new to most, which is why this reissue is justified. A reissue of this demo on 12” vinyl would be a very good idea too, and while we’re at it, those first two albums somehow never made it to a vinyl record either. Yep, the world is full of unexplained miracles…