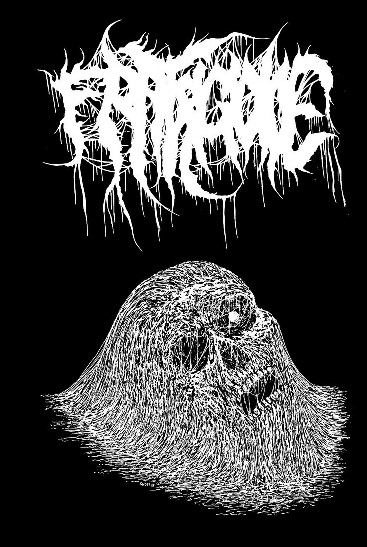 By definition, “fratricide” has a double meaning of (premeditated) killing one’s own brother or in military terms, accidental killing of an ally. Is it a coincidence that the duo Fratricide, consists of brothers John (drums) and Michael (vocals, guitar, bass) Foster?

Based out of San Luis Obispo, CA, they released a demo “Horrible Deformities” independently this year on January 31st, re-released through Sunken Tomb Records on March 29th. For being a four track (25:05) demo, every track is extensive, giving more charm to this 2020 gem. Very impressed with the quality for being their debut into the Death Metal scene.

“Revealing Your Flesh” is a nice opener that doesn’t overdo it with gimmicks, and just straight to the point Death Metal with oozing vocals and primitive playing style. For the second, and longest track “Consumption of Coagulating Decay (8:05)” it’s filled with variation and tempo changes throughout, even featuring a grimacing solo between 5:55-6:15. Sharing the spotlight versus one overshadowing the other’s playing. Percussion is apparent & shows that John compliments whatever riff Michael throws his way, as if they’re both in sync. Normally I’d say long tracks like these should be condensed, but there’s always an exception “Festering Effluvium” makes me believe this demo was organically recorded in a sewer. It’s dirty sound with bit of groove thrown in, favourite is when it slows down around 4:31 and throws a nice groovy riff at 5:18, small bits like that make a big difference in the appreciation for OSDM sounds.

They did a hell of a job to give their fresh take on it, as majority of DM bands out of Cali do. Lastly “Fratricide” rounds this already badass demo on a high note, giving deviation of how they incorporate Death Metal with old school flair & keep a contemporary sound to it, mix in some doom & groove, combining when necessary. They have a good thing going and will only get better from here. (Tori Belle)