Forgotten Chaos – Victorious Among the Damned 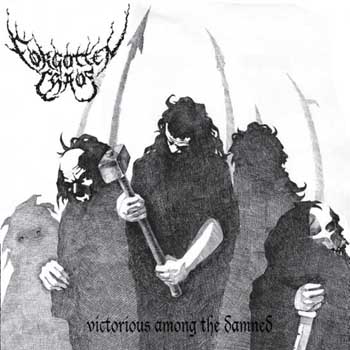 Switzerland’s Forgotten Chaos have been creating their brand of black/thrash metal for 3 years now initially forming out of the ashes of previous band Bestial Torment. With a line up consisting of drummer Thorn and guitarist Draugrym of Moonfrost, you can bet your life that the music featured on their debut full length ‘Victorious Among The Damned’ is some of the grimmest, most old school you are likely to hear this year. Well played but not so well produced, the 13 songs featured on this disk take you back to a time when things were a lot simpler, before all these ridiculous sub-genres like ‘Mountain Metal’ or ‘Forest Metal’ came to saturate the extreme music scene. Quite content on creating music that is straight forward and to the point, Forgotten Chaos have produced an album that although definitely not a masterpiece, has a certain atmosphere and charm that is hard to dislike. You get the feeling when listening to ‘Victorious Among The Damned’ that the band really doesn’t give a shit what people think.

Seeming to have the (sorely missed) DIY attitude of plug-in, turn up and rip peoples faces off, the barrage of raging guitars, tight drumming and vocals that could have been ripped straight from ‘Verwutsung – Invoke The Dark Age’ era Abigor are a much welcomed break from all this clinical, wishy-washy bullshit that seems to infiltrate the airwaves these days. Standout points include the brilliant ‘Victorious’ which sees the band utilizing a more melodious approach to their song writing and the brilliantly titled ‘Misanthropolis’ which would not be out of place on some of Darkthrone’s earlier recordings, a definite pleaser for all you old school maniacs out there. Forgotten Chaos have proved the point of ‘Honesty is the best policy’ on ‘Victorious Among The Damned’. No three hour fret wankery on every track, no triggers, just a bunch of guys who simply love what they do and do what they love. Here’s to the next one. (DaveW)