Fallen Angel [USA] – Transcend with the Dead and Rotten [Demo] 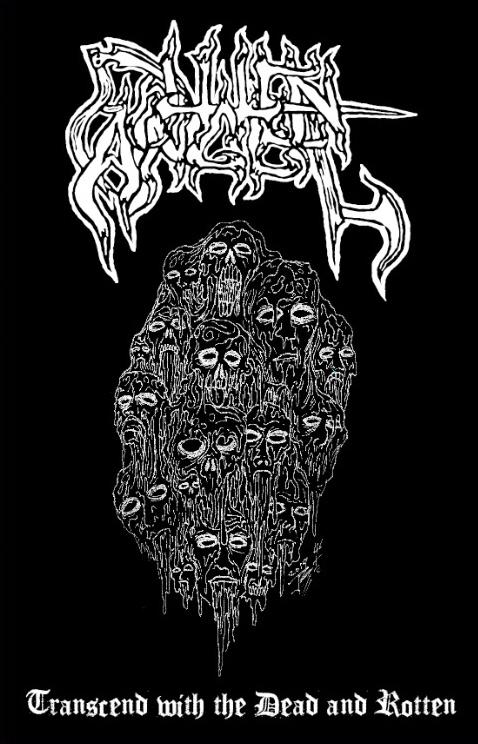 Fallen Angel, a more than fitting moniker for filthy blasting Death Metal, although there are or were already some bands with that name, to mention especially the ones from Denmark who released some killer demos in the 90s, but that is just a side note. The now be spoken ones are from LA, a city that already spawned some killer bands and one that seems to be relevant for this recording, Sadistic Intent, more about it later.

Fallen Angel released, together with “Transcend with the Dead and Rotten”, 4 demos in their 16 years long career, one of them being a live rehearsal. So they are dwelling in the underground for a long time. Do they deserve attention? Yes I think so, their newest output is dirty, ugly, raw to the bone and should already please all 80s/90s demo and first album lovers that are into bands like Necrovore, Morbid Angel, some early Finnish Death Metal and Sadistic Intent.

The production is raw as fuck, vocals drenched in reverb, high pitched snare drum and aggressive guitars than seem to cut everything down. Everything helps to create that rotten atmosphere, although for a next release it would be interesting to hear how the band would sound with a more “modern” production, no crystal-clear stuff, but a bit more towards todays standards would be nice, because I see a lot of potential in this band.

About the songs, the riffs are killer, the songwriting skills are a high level, the band is able to change easy from fast to slow, keeping all fluid and flowing. It has the panzer, the artillery, the nocturnal feeling, the morbid aura and that’s all I need for Death Metal. Favourite track is without doubt “Rites of the Descent” as it sounds like Sadistic Intent and Morbid Angel were jamming together. I really would like to see this on their debut album If there ever is going to be one (did you understand guys? Do it!!).

So, summary: nothing new in the Death Metal landscape, but something putrid is growing in the swamps that should attract morbid souls starving for raw metal of death. More of this please! (DPF)