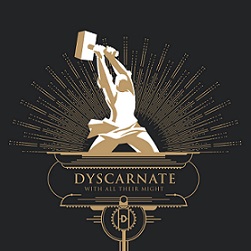 When first receiving positive comments about a band called Dyscarnate from the United Kingdom, I had to check out this death metal threesome. I saw the album cover and thought…hmm, this definitely doesn’t look like a death metal cover, more in the vein of some hardcore band. Was I mistaken after listening to this record titled “With All Their Might”. A blend of death metal mixed with groove, mighty guitars, dual vocal attacks and entirely filled with class songs is what you’ll discover! I’ll dissect some songs, like for example “This is Fire!” with the mid-tempo part in it, “To End All Flesh Before Me” with the doomy intro that burst out in a bombastic speeding of instruments, track “Backbreaker” that immediately sucks you into the flow and hasn’t stolen its name, and “All the Devils are Here” where you can feel the guitars erupt and could explode from aggression any moment. But as said: each track has its own unique input and when listening to “Nothing Seems Right”, the song that lets this album fade to an end, you can feel and hear that these guys have the skills to write a perfect song. The melodic start turns into a languid pestle where contrary riffs makes this an unique song! And what to say about the blast beats in “Traitors in the Palace” and the phenomenal breaks in “Iron Strengthens Iron”. Both vocalists sound brutal and sing in a clearly audible death metal style, sometimes the one more screaming in certain tracks then the other, but a perfect cooperation in my opinion. And to make it even better: every riff breaths power and strength. I must admit it’s been a while since I was blown away after one listening session from a records, but this is simply THE sound of Armageddon! I dare you to resist this one! Enough said: this is a must have. (Fredde)