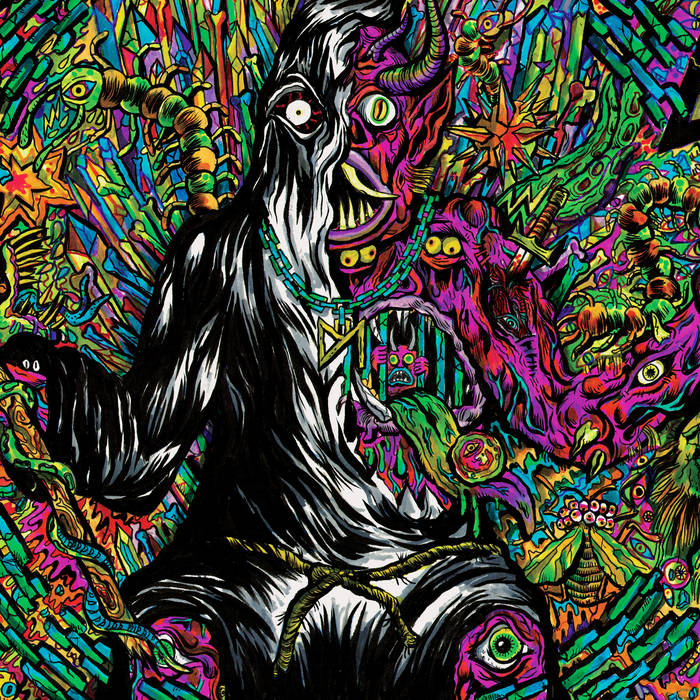 Decked out in crazy cover art, ‘Svartpønk’ is the sophomoric album release by Norwegian Blackened Thrash/Speed Metal/Punk quintet and follows up their debut album entitled ‘Sosial prolaps’ released in 2018. This new opus has been released on LP by fellow Norwegian label Flue Plateproduksjon.

Gritty and marauding is the Punk drenched Black Metal of Drittmaskin, and their ‘Svartpønk’ album gets off to a furious start with punchy tones of ‘Al-Namrood’. Usually, I find that with releases such as this, that the band are predominantly Black Metal and utilize Punk like song structures to create a fast and fun sound. Drittmaskin takes it way further than that; their sound is almost Blackened Punk, complete with rabble rousing bouts of yobbish vocal work and lots of stompy sections that allow for the listener to really get his or her hooks into!

For a forty-five-minute-long album, ‘Svartpønk’ really flies by! Tracks such as ‘Mors nydelige rose’ and ‘Glatcelle’ are real head-bangers; romper stomping odes to hellish blackened fury and catchy alcohol fuelled riffs. Other tracks such as the Blitzkrieg assault that is ‘Rottekrig’ focus more of a punishing and unrelenting Black Metal sound; still with a simple and effective structure but with the vocals and harrowing guitar melodies dialled up to eleven.

Just when you feel that this album can’t throw up any more surprises, they come out with the Thrash tones of ‘La dei dø!’, a two-minute explosion of upbeat, rampaging guitar leads, belligerent drumming and harsh vocals.

‘Svartpønk’ is an incredibly fun album to experience, but don’t be deceived by the Punk shenanigans. This is a fierce album that is capable of delivering up some truly aggressive Black Metal, whilst also showcasing the bands thrashier chops.