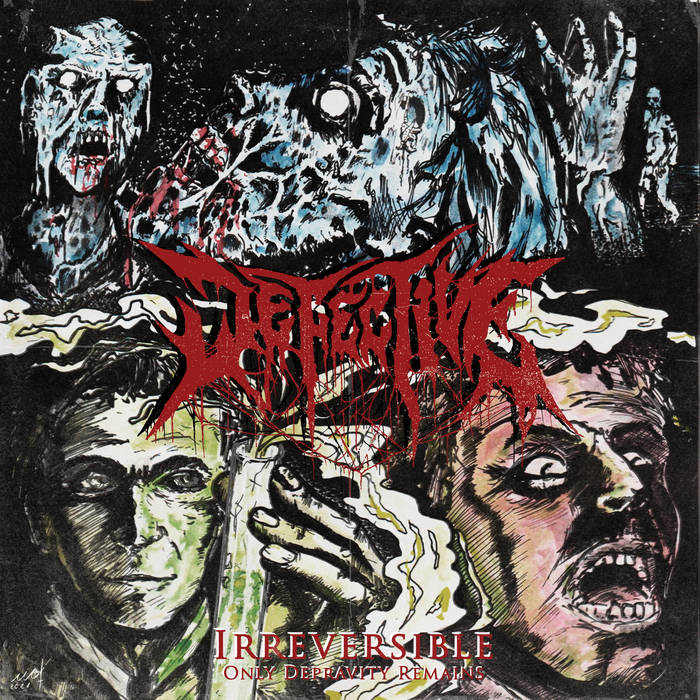 With Irreversible, Germany’s Defective does not serve a ready-made bite, it takes some chewing before all elements fall into place and Defective’s powerful Death Metal starts to reveal its details.

The 3-track EP tells the story of a heartbroken professor trying to bring back his wife from the dead. As expected, not everything goes as planned, the professor gets mentally unstable, and causes a deadly virus to take the world by storm.

The band plays the story from back to front, inspired by Gaspar Noë’s eponymous cult film.

Everything about this EP shows a great love for the craft of making music, the eye for details, the matching artwork, the complex structure of the songs and its powerful production. The sound quality of irreversible, in which all instruments are assigned an equal sound, blows me away. Defective plays American-inspired Death Metal, but manages to avoid the clinical, sometimes mechanical sound of modern Death Metal bands, resulting in an organic and natural tuning. Mister Corpse Ripper has a deep, articulated and moist grunt, well supported by his deep grumbling bass, while the other band members regularly interrupt each other with unruly solos and complicated yet infectious rhythms with which Defective builds  bridges between Old School and Modern Death Metal.

During “Chapter 1: Schizophrenic” Mister Ripper gets vocal support by Dead and Dripping’s Evan Daniele to help represent the professor’s schizophrenia. “Chapter 2: Infected” opens with a chunky bassline, depicting the sickness that is spreading fast. The fragments mentioned above are just a few details of the connections made between the music and the content concept. Defective has used all their talents to make this concept EP a complete experience for us listeners. Be sure to give it a listen. (Franki_boj)