Totholz – “It’s the old school spirit I live for”

That a demo tape does not always have to be spectacular in the sense of originality or extremely good musicianship, German Black Metal band Totholz proved with their only demo tape from 2021. I reviewed that demo tape earlier last year and the authenticity of the music appealed to me so much that in my mind I was already running to the bank to get some Deutsche Marken to put in an envelope to order this tape. Enough reason to have a chat with the band, vocalist Vetr answered my questions…

The band was founded in 2019 by the two of you? How did that come together? And was the musical direction clear from the very start?

I think the idea of being in a metal band was always in my mind since a very young age but starting a Black Metal band or project was a very big thing with my discovery of the genre. That was the biggest turning point in my life. Most of the time when I listen to other BM bands these days, I cannot feel any vibes of the 90’s, the sound as it should still be in my opinion. So the path was chosen for what direction I wanted it to be. I think it all came sort of together with Avgrunn, who came to me in 2019 and we understood each other well, that we started working on some demo tracks. Which turned out very well.

As far as I was able to find out, both of you were not in other bands before. Is Toltholz your first band? Are you guys in other bands as well? And, on a personal level, how did you get into metal?

How I came into metal..that’s a good question. It definitely started with my parents introducing me to Alice Cooper and Sabbath when I was very young. Growing up listening to Rammstein and Pantera, mabye I was about 8 or 10 that time, laid my path for really heavy music. Of course I was later also influenced by our local Stoner Doom Rock scene here, where people got me connected to bands like Down, Crowbar or Superjoint Ritual. But when I got in touch with Celtic Frost – ‘Morbid Tales’ and the ‘Panzerfaust’ album from Darkthrone, it changed something deep in me that I started going deeper in the Black Metal matter and the whole underground stuff, where I am now and be die-hard about it.

No, it’s not my first band, but other projects I started or I was in never really came that far, with the people I was around that time, to record any good songs. I have a strict mind you know. When I have an idea of how I wanted a song to be, I’ll make it like that with the possibilities I have. I dont want to discuss around most of my lifetime, just to get a song perfect. It’s black metal, it doesnt have to be perfectly polished or shit like that. Just throw out the raw power of your feelings and your mind. Thats the old spirit I live for.

For Avgrunn, this is also not his first band/project. He already played in a band for a short time before and was invited to do a mini-local-tour with another band as well back in late 2018. Currently, he plays rhythm guitar in a band whose name, on his demand, shall stay anonymous. He also says, that the metal-world got him already in teen life. Well, he’s not directly from Germany in general, but a music lover. One of his big inspirations since he lives here, is German metal and that’s one reason that we got in contact with each other. So the Totholz poject forced him getting to know with BM more to push him trying more difficult riffs and also more extreme ways of playing. Which was in his very interest, to increase his talent further. 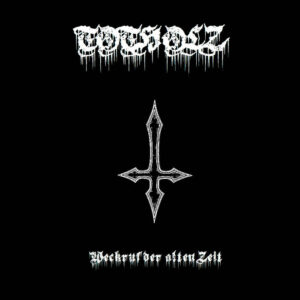 In the review for your demo tape, I compared the music to the German Black Metal scene of the late 90’s and early 00’s. What do you personally see as your main (musical) influences for Totholz?

I think I can say it for both of us and most people will surely tear me apart for it, but I don’t give a fuck. We are really influenced and inspired by Darkthrone, Burzum, Mayhem, Carpathian Forest, Armagedda, Nargaroth, Moonblood and stuff like that. So a good mix between old Norse and old German Black Metal.

Your demo tape was released by yourself, with a nice DIY-spirit. A xeroxed cover and home-dubbed tapes… Was that something that you were aiming for with this first demo tape?

Absolutely. Like I said earlier… It’s the old school spirit I live for and die for it. Everything I can do with my own capacities, I do it like I want it to be, no frills.

The title of your demo translates to something that means ‘Old time wake up call’, what exactly do you mean by that? And what does that concept mean to you?

Its more a “wake-up call of the old times” and about respect. Every part of me screams for the early 90’s and 00’s and I think with the titeltrack we really aimed for that. Putting our heart and soul in the music and let it speak through the instruments. Thats what Totholz is all about and what comes out makes me really proud. Its a restart of what is long forgotten and no more respected by many others but I still do. And I mean it like that!

The music on your demo tape evoked a somewhat nostalgic mood in me. About 20 years ago I loved those black and white Ablaze magazines. I listened to the CD, hung the poster in my room and of course I tried to go through the articles as best I could. Of course, times have changed tremendously. How would you describe the German Black Metal scene today?
Thats a very difficult question to answer because everybody here in the Eastern part of Germany will say something different about it and I thought very long for an awnser to this for myself…

For me its not really dead, but also not alive anymore. Through the years you dont see here so many bands playing. Only the big ones, once or twice and maybe some of the established bands from the scene here but not that many till almost none new band that starts with this genre, speaking for Saxony. Of course I talk about the old times alot but to be realistic, thats where the most of the movement happened. Nowadays, thanks to “thinks” that happen in the world at the moment and all the “nothing-patrons” in the scene, nobody’s allowed to do anything or whatsoever, so how can you shock somebody with something new? Yes, simply you dont. So bring back whats long forgotten and respect whats left of it.

Do you feel part of that German scene or is the band more of a personal endeavour?
Of course it’s a German band and most of the text’s im writing, are in German but I dont really think, Totholz is a part of the German “scene”. Of course that can change but at the moment there are still no real reasons or indications for it.
Im happy about every person to that our music reaches out to and touches them exactly in there hearts like me. It doesn’t matter whether you come from Germany or anywhere else, but the fact is, that in most other countries and scenes, certain styles of music are valued more than here.
Yes, that sounds maybe sad in the first place but like I said, I’m more then happy to see it change, even if I have to help a bit along with it.

One of my favourite questions is to see what you are personally listen to, it tends to give a good idea what kind of person you are. So, what are your favourite records? And which were the latest records you have bought?
Like Goat Agressor from Malum I will comment on this like him. Black Metal is like a mountain. I think everybody shoud dig his own tunnel through it and find his own personal gold.
I think the 6 or 7 Bands I mentioned earlier, are good examples to get an impression on what I listen to when it comes to Totholz. Of course I have some other good bands besides from Black Metal but hey… who hasn’t? The last records I bought was the newer Nocturnal Witch – ‘A Thousand Pyres’ and from Nigrum the ‘Cremer Igne’ demo tape.

Your first demo tape was released back in 2021. What can we expect from Totholz in this new year?
Absolutely!! We are working continuously on new material and new songs. Nothing’s definite yet, but I can say with certainty that we’ll surely be putting out something new this year. It’s still up in the stars whether the first thing will be a new single or we can still finish a full album. Also looking forward to drop out some merch with the new stuff and design. For those who are interested in buying a shirt or maybe a patch, we will see, but I got you!

Thanks for your time, the last words are yours!
First of all, thank you for this opportunity and don’t forget to support the underground motherfuckers!

Let me tell you one final thing: respect the old to create something new. I don’t care from where you are but keep that always in your minds and keep it fucking trve!