As you may know, we at VM-Underground are fans of Blood Harvest releases. One of the new bands on their roster is Maligner, once from Chili but now resides in Sweden. While the demo had a Merciless and Kreator kind of vibe going on, the debut album will attract people who likes good old Death and Sadus as well as you will get some furious and aggressive Death/Thrash from back in the day the Russians used CCCP as abbreviation for the Soviet Union.  Let the guys of Maligner introduce themselves…shall we begin with the Chile-Sweden connection? (Ricardo)

First of all, the band was actually formed in Sweden…

…Patricio (Aztiak) moved to Sweden in 2013 for non-musical reasons and Rodrigo (Ertheb Somus-Ra) moved here when he was a kid, both long before the band was formed hahaha. Regarding Emanuel (Maligno), he’s born in the north of Sweden but moved south a couple of years ago to work. When Patricio was putting up a show for the Chilean metal band Sadism in Malmö, 2015, he was asking around for a venue and got in touch with Rodrigo through a mutual friend. After a few e-mails Rodrigo mentioned that he was interested in playing drums in a metal band and asked if Patricio was also a musician, that was the beginning! So since Patricio had a metal background but right now only played punk music, he was doubtlessly interested. They agreed on playing a compromise between death metal and thrash metal since Rodrigo wanted to play death metal and Patricio’s playing style was more thrashy at the moment. Emanuel, who Patricio had met before at punk gigs, found out about their new project through a mutual friend and got in touch with them right away to handle the bass duties in the band. After a few rehearsals and some persuasion, he wrote some lyrics and started to sing as well. His vocal style turned out to be a perfect match for death thrash.

And what about musical inspiration…?
Wise to say that we don’t want to create a new metal genre so that’s the obvious reason why we make the things “old school”. A mix between Thrash and Death Metal was the result of Rodrigo´s death metal desire with Patricio´s natural thrashy style on the guitar, and all of this together with Emanuel’s deathy singing abilities. Rodrigo wanted to play fast so bands like Sadus, Kreator and Merciless became an influence to the drums patterns. Patricio liked technical Thrash Metal so bands like Coroner and Forbidden were also important to the creative process. And Emanuel loves Death so Chuck’s style is very important to what Maligner is as music. Evidently we like a lot of bands but just to name a few more that we feel they inspire Maligner’s music, we can say Morbid Angel, Pestilence, Sepultura, Testament and Pentagram Chile. The best of playing a mix between two big metal genres is the flexibility we have for creating metal music. Right now our music has had the focus on aggressiveness and velocity with a bit of technicality, but with lack of “slow” parts. However, we know we can make more technique and “slow” parts when we want, without leaving our “own” style and sounding as Maligner does it, and that’s great. 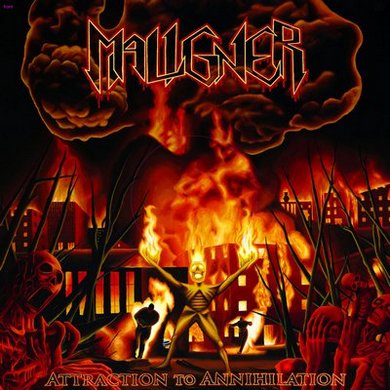 Let’s move to your debut album: “Attraction to Annihilation”.  Tell us all about it!
The writing process was pretty much the same as with the Demon EP. When writing new material, Patricio writes the music, Emanuel writes the lyrics, and all together we produce and arrange the music rehearsal by rehearsal. We always make a crude demo recording of every song so we can listen to it and make possible changes. We change some parts depending on how the singing will be and off course Rodrigo changes the drums patterns when he wants.

Regarding the recording and production, most of these things were done by ourselves. Attraction to Annihilation was recorded, as well as Demon EP, in a small studio at a youth center in Lund, Sweden, where Rodrigo formerly used to work. Since all of us has a lot of studio experience, it felt natural to do it by ourselves. But we actually didn’t put much time in discussing the sound to aim for. The mixing and mastering was done by Mattias Persson, a friend of ours who has been recording a lot of bands in the area. We have great trust in him and he knows our style so we gave him quite free hands with the mixing.

The lyrics…lets talk about the lyrics….
Emanuel writes all the lyrical material. The themes are inspired by both the actual sound of each song and personal reflections on past and present events. For the Demon Ep he wanted to write about concrete stuffs that relate to our current world, or fairly recent events like warmongering, arms races, cold war, uprisings and crimes against humanity. He kept that style for most of the songs on the new album but has also started experimenting with more personal and psychological stuff like desperation, feelings of impending doom and the ambiguousness of the human mind. It can be such a huge disappointment listening to a musically good band and realizing the lyrics are complete crap, so we try to avoid that, hahaha. But after all we probably focus more on the instrumental efforts than the lyrics when enjoying music.

Happy with the reactions on the album?
The reaction of the album has been very good in most cases. A lot of people seem to appreciate our guitar work and compositions combined with the old-school sound. There was a couple of reviews that was more indifferent to the outcome, who thought the album was too fast with too many riffs. But it’s normal since our style of Death Thrash is not so trendy in the metal underground right now. But who cares, we make music because we love it.

Blood Harvest! As said we are fans…and it seems your drummer is the label owner, so you will not get screwed ha!
We guess it has its pros and cons. Either way Rodrigo always tries to keep both parties best interest in mind. But he would like to think he does that with the bands he works with and which are signed to the label. He usually says that he is a musician first and a label-boss second, hahaha. Well, we know who we are working with and the risk of getting screwed or communication problems is minimal. Fortunately, we have not had problems at all so far hehehe. 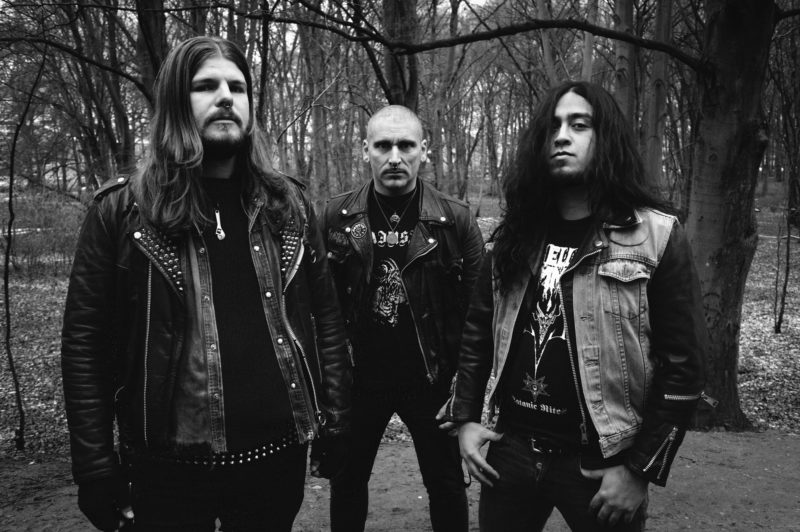 And what will the future behold for Maligner?
Right now we just have some ideas of new songs (riffs here and there), but nothing complete. The focus for new songs should begin in late 2019. So we think it’s maybe too early to talk about the differences between possible new songs and the old ones? Hehehe. In the near future (2019) we will try to play as much as we can next year and for promoting “Attraction to Annihilation”. At least playing some festivals and a mini tour outside of Scandinavia (Germany and Netherlands maybe?). After that we can focus on a new album. As we already said, we have new ideas for new songs so making more music is absolutely the future for us now.

Before we wrap up this interview, do you have any final words or thoughts?
We just want to thank VM-Underground and Ricardo for the support. Also invite all of you who like the most extreme Thrash Metal (almost Death Metal) to listen to Maligner. Demon EP and Attraction to Annihilation are in full streaming for free on Bandcamp and Youtube, as well as Spotify so there are no excuses! After that if you like our music you can buy the albums, merch, or simply go to the gigs we want to do next year. You can always find us here: malignerband@gmail.com, https://www.facebook.com/malignerband/, https://maligner.bandcamp.com/