Hellevaerder – “No one expects a tiny woman like me, to produce such a sound”

Last year, Dutch Black Metal band Hellevaerder released their debut album ‘In De Nevel Van Afgunst’ through the prolific purveyors of Dutch Black Metal and since VM-Underground is also based in The Netherlands it was only one thought away to ask vocalist Miranda a few questions. In this short interview, she takes us into her world of thoughts and tells us about what drives and inspires her. Indeed, it turned out to be quite a personal chat…

Hi Miranda, thanks for taking the time to answer these questions for VM-Underground. What is the latest news for Hellevaerder? I saw you have been gigging a lot lately…

Yes, correct! And also for this year, we have a few cool gigs! But to be honest, I think the biggest news is our ‘In de nevel van afgunst’ 12″ vinyl, which will be released next month (February)! We are very excited about that!

The very first seconds of your debut album you are making quite a bold statement: ‘Je bent niks waard!’. Which translate to ‘You are worthless!’. What were you trying to point out with that?

Our drummer, Daan Bleumink, is the writer of all the lyrics of Hellevaerder. He, and we, spit our thoughts into the work. Everyone experiences their own life lessons and has their own things that need to be ‘processed’ in their own way. The music we make offers an outlet for this. An uninhibited way to be ourselves and to let out our anger, pleasure and sorrow. They are very personal lyrics that each band member interprets differently, our feelings are ours and no one else’s. It can be thoughts in your head, about yourself. Or things that people said about you. Or things you think about people. 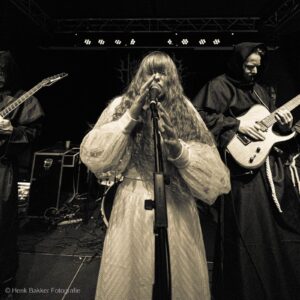 I’m not sure if you want to talk about this, but you recently made an open statement about the difficulties in your personal life over the past few years. Does the band play any part in this?

I am okay to talk about it, no problem! The band certainly played a role, but not in a negative way. Actually the opposite. Hellevaerder is an outlet for me, but also a hobby that gives me positive energy again. The Corona pandemic was difficult for me, because my outlet disappeared. And also in a period when I was losing myself. It really took me a while before I could pick myself up and get the energy out of Hellevaerder again. Last year I was in a burnout, because of my work as a healthcare worker. I worked too much, and was taking care of a lot of people. But it was also because of the choices I made myself, in my private life. I was not processing traumatic situations properly and actually letting everything and everyone go ahead. I was losing myself. That combination of misery didn’t go so well. Physically and mentally I collapsed. Fortunately, with the right professional help, a lot of rest and lovely people around me, I recovered. Some situations or activities can still be very intense for me. I notice that I’m tired faster than before and that I also get overstimulated faster. I also have to organize the performances with Hellevaerder well for myself, in combination with my work. Taking enough rest between Hellevaerder and my work has become very important to me.

For you personally, what is the main driving force in Hellevaerder? Does it give you a way to blow off steam?

Yes, for me it is to blow of steam. But I also kinda like it to shock people, no one expects a tiny woman like me, to produce such a sound. It gives me such a geat and powerful feeling. But I also enjoy being dragged into the darkness.

On a musical level, what would mention as the main musical influences for you and the entire band?

For me personally; Chelsea Wolfe, Lingua Ignota & Oathbreaker (Caro Tanghe) I think their music (and especially their vocals) are so powerful, dark, mysterious and gloomy. And they are also women I really look up to.

As a band we never really had great examples. Daan, the writer and founder of Hellevaerder, has gained some inspiration here and there from: Hate Forest, Immortal, 1349 & Belphegor. But we really try to create something ourselves. 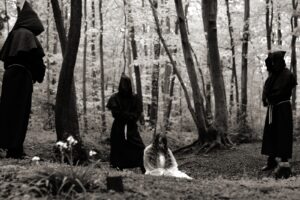 Since there are not a whole lot of women in Black Metal (fortunately, though, this is something that is less and less of a novelty these days) I saw Hellevaerder being compared with Doodswens more than once. Is that something that bothers you?
Oh, really? That’s the first time I hear that, haha. But I think it’s cool. Their music is not only raw and hard, but also sincere. Doodswens processes their unpleasant feelings, thoughts, but especially their intense personal experiences from their lives, in their music. You can feel that, like a clap in your face. I have respect for them. So I see it as a compliment!

Your full-length is released on both CD and cassette tape by Zwaertgevegt, a label that also released your split 7” with Perfide and a discography tape. That label is known for strongly and exclusively supporting the Dutch underground Black Metal scene. Can you tell us something about your cooperation with Zwaertgevegt?
We already knew Alex Zwart, before the start of Hellevaerder. When he heard our first work, he was immediately very enthusiastic. He saw potential. From that moment on, he wanted to support us and especially help us grow. He still does this and has also become a good friend of ours. We really owe a lot to Zwaertgevegt and we are very grateful to him. We also promote his label, also to help him grow! In this way, you can say, we really help each other.

The album has not yet been released on vinyl. Is that something that is in the works or that you would consider doing?
Yessss! Earlier in this interview I mentioned that our vinyl is expected in February! Finally! We are very excited about it. 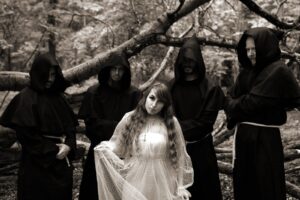 This is a question I actually always like to ask in every interview, I’m curious about your most favorite records of the moment. What do we find on your record player or in your Spotify playlist. And what are the last records you purchased?
Oef, let me think… That’s a hard question, haha. But I think my favourite albums are:

(Gosh, all of the above are women, haha)

And I am also a huge fan of Agnes Obel. It’s not metal, but I really have to mentioned it. Especially her albums; Citizen Of Glas, Aventine & Myopia.

The last album I purchased is from Beenkerver – Ontaard. I bought the cassette. It is also certainly a good newcomer in the Dutch black metal scène. It’s definitely worth listening to!

Also be sure to check out the review for Beenkerver’s ‘Ontaard’ here. Back to Hellevaerder, what can we expect from the near future from the band?
Definitely more gigs, and also working on a new album!

That were my questions, Miranda. Thanks a lot for answering them. If you want, the last words are yours…
No, thank YOU! This was really fun to do. I want to wish you all the best for 2023!