Hello, Fleshy Guys! Recently, Fleshcrawl recorded new songs for the Split cd/tape with Skinned Alive. So far, what kind of reviews did you receive? Is the public perception of the split any different from your own?
Hi there! All the reviews we received so far were quite good. We expected nothing, actually it was the first release since years. A lot of people thought we dont exist anymore haha. But we played live through all the years.

It’s been 9 years since your previous album, “Structures of Death”. And finally we have new materials. If you would be asked, to compare these new songs, To any songs of your former releases. What would be the main difference?
Mostly i think they are a bit more melodic but in the end it´s still Fleshcrawl. Listen to the first song “Return of the Flesh” you will hear immediately the typical Fleshcrawl tunes. So there is no big difference compared to former releases. What you hear is fuckin´Fleshcrawl!

Working on the new tracks, how do you challenge yourself? Do you set up any goals like “the new somgs should be faster”, or “the new songs must be heavier”? Or is it just the natural result of the hard teamwork?
You can not plan anything in the Fleshcrawl cosmos haha. Every song should sound like a song from Fleshcrawl thats all. If any riff don´t fits in this holy law than we don´t use it and thats the whole secret.

Did you have any particular songs that took you more time to write than usually? What would be your top song of the new tracks from this split and why?
For me personally the song “Kingdom of skulls” is the top song of the split. It has got typical lyrics but the pronunciation was really hard haha. We played this songs several times live yet and it turned out to a really killer song.

This time you worked with which producer? How did it go? Why did you decide to choose him to be the producer of the album? What can you say about your cooperation.
This time we worked with Maggeson of mighty Revel in Flesh in his homerecording studio VaultM. Maggeson and me are friends since the beginning of time i guess. We know each other over 20 years. I recorded a lot of stuff together with him in his studio and also we did several projects together. He is a death metal freak like me so nothing more to say hehe

Let’s talk a bit about the song titles, where do they come from? What are the meaning behind the lyrical themes? How tight does it go, with the total concept of the band?
For me my vocals, my voice, is another instrument beside the guitars or drums. I write typical death metal lyrics about death and gore nothing special nothing else. This time the 2 first songtitles, “Return of the flesh” and “Reign again” speaks for their own. Fleshcrawl is back and we reign again haha

The new shirt art was created by? Quite a great artist. How did you find him?
The shirt art was created by the incredible Roberto Toderico of Toderico Art! He is a fantastic artist. In this case i talked to Randy from BrutalArtRecords about doing a special shirt for the release and he told me Roberto is a big fan and want to do a design. Also I´m a big fan of Roberto and I wanted to work with him since years so the unholy collaboration takes force.

Recently you were confirmed for an Asian tour, will you be performing as full headliner? How did it go? Do you have connections there? And in this period of terror attacks. Aren’t you guys a bit scared? What shows would probably be the highlight, or is your most exciting place you are going to play?
The idea was born as my friend Aabeg from the Nepalese death metal machine Dying Out Flame asked me to play the Nepal Death Fest in January 2016. We want to do that but we needed more gigs to handle the costs of the flights. Aabeg and another Nepalese brother helped us a lot with their connections to other Asian promoters. With our fee from the gigs we could pay the flights and so we could do a Asia tour playing in countries like Nepal, Thailand, Taiwan, Philippines, Singapore and Vietnam. To handle to cost to Nepal we played a pre gig in Dubai. Everywhere we played headlinershows except in Singapore.
To your question about terror – fuck terror, fuck terrorists, fuck everybody who disturb people living their lives as they want to live it
For me personally the most exciting places were Nepal and Vietnam. I will go back there personally this year. 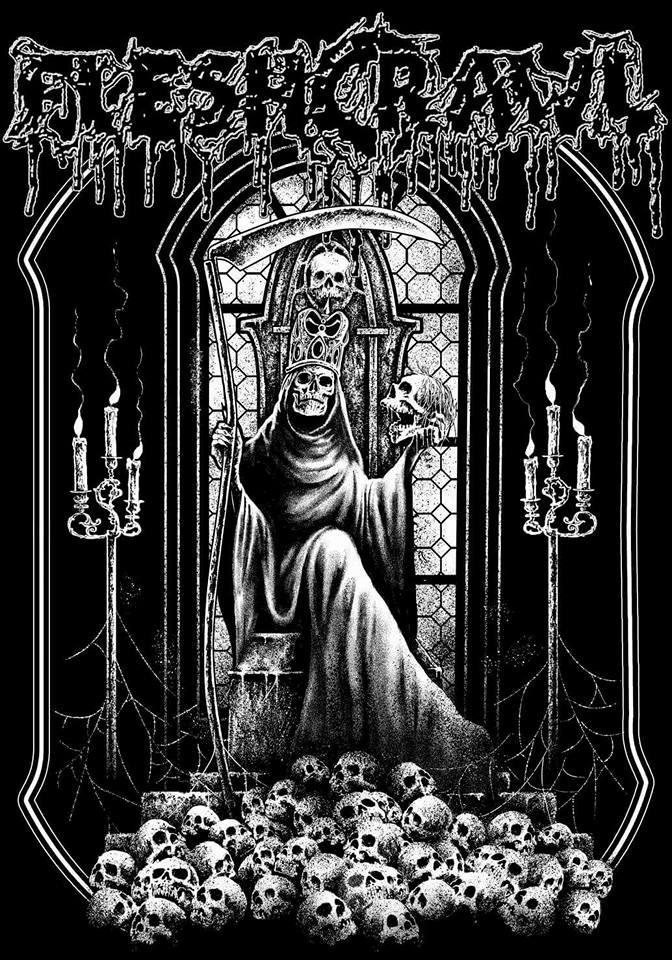 Having so many albums in your discography, it’s probably a tough decision to pick up the right songs for the set-list, isn’t it? Usually, what is your choice based on? What are the tracks that are always asked by public?
Its a hard decision whith songs we should play. You have want to play new material but also you have to play older ones or let me say classics. So we change songs in the setlist but we have to play songs like “As blood rains from the sky”, “Soulskinner” or “Dark Dimension” to name a few. To satisfy everybody is impossible haha

Let’s get back in time and talk a bit about the early days of Fleshcrawl. First of all, do you remember who came up with that name? As you had some issues with the former names before. Did you discuss any other versions as well?
Stefan our former guitar player came up with Fleshcrawl. The names before like morgöth or suffocation where used as everybody knows from other bands haha.

The band was formed in 1987. Tell us, how did you meet each other? What was your first rehearsal place like? Do you remember any of your first shows? And what were these like?
The founding members Stefan and Basti met at school and so the story began. We met each other on a gig of my former band AletheiaRelief somewhere in south of germany i think. One of the first Fleshcrawl gig I was also there as an guest. In the south of germany everybody knows everybody in the scene these days. Our first reheasal room was in the basement of a bakery but we lost it due to satanic music on sundays haha

Being a young metal band in the late 80s, how could you describe your local underground? How did you discover the new bands? And how involved into tape-trading were you?
As i said before. Everybody knows everybody haha. Especially in the south cause every band played in smal youth center and everybody was there. Later the german scene with bands like Atrocity, Torchure, Morgoth, Lemming Projekt and so on was good conected. Bands from foreign countries we knew by trading tapes. This was also the reason we have to change our names. Both morgoth and suffocation released a demo before us haha. From the beginning we had a close connection to the scandinavian scene. So this is why we covered bands like Demilich, Demigod or Carnage.

And I have the last question. Why was there this long period of total silence around the band? And did anyone of you guys do some other projects or bands?
This fuckin long peroid is based off privat things. Our drumer for example have to work for over 4 years in the UAE. So we have to play live with different session drumers. A lot of rehearsel time was spent to lern the songs with them. Another reason is we are getting old and lazy haha but to be honest everbody have normal dayjobs, familiy and some have children and a day has only 24 hours. Simple but the truth!!
Me and Olli are involved in other projects, cause we want to play metal more than anything else. Olli is part of mighty heavy metal machine Stallion and I am a part of CarnalGhoul, a collaboration of bandmembers from Desaster, Demonbreed and SkinnedAlive (thats why the Split takes part) and Fleshcrawl. Also i did several guest vocals for bands like Lifeless, Megascavenger, MeatTrain and so on.

That’s it, thank you for the interview. Would you like to add anything in the end?
Thanks for the interview and your interest in fuckin´Fleshcrawl. Hope we meet one day to drink a few beers together! Cheers