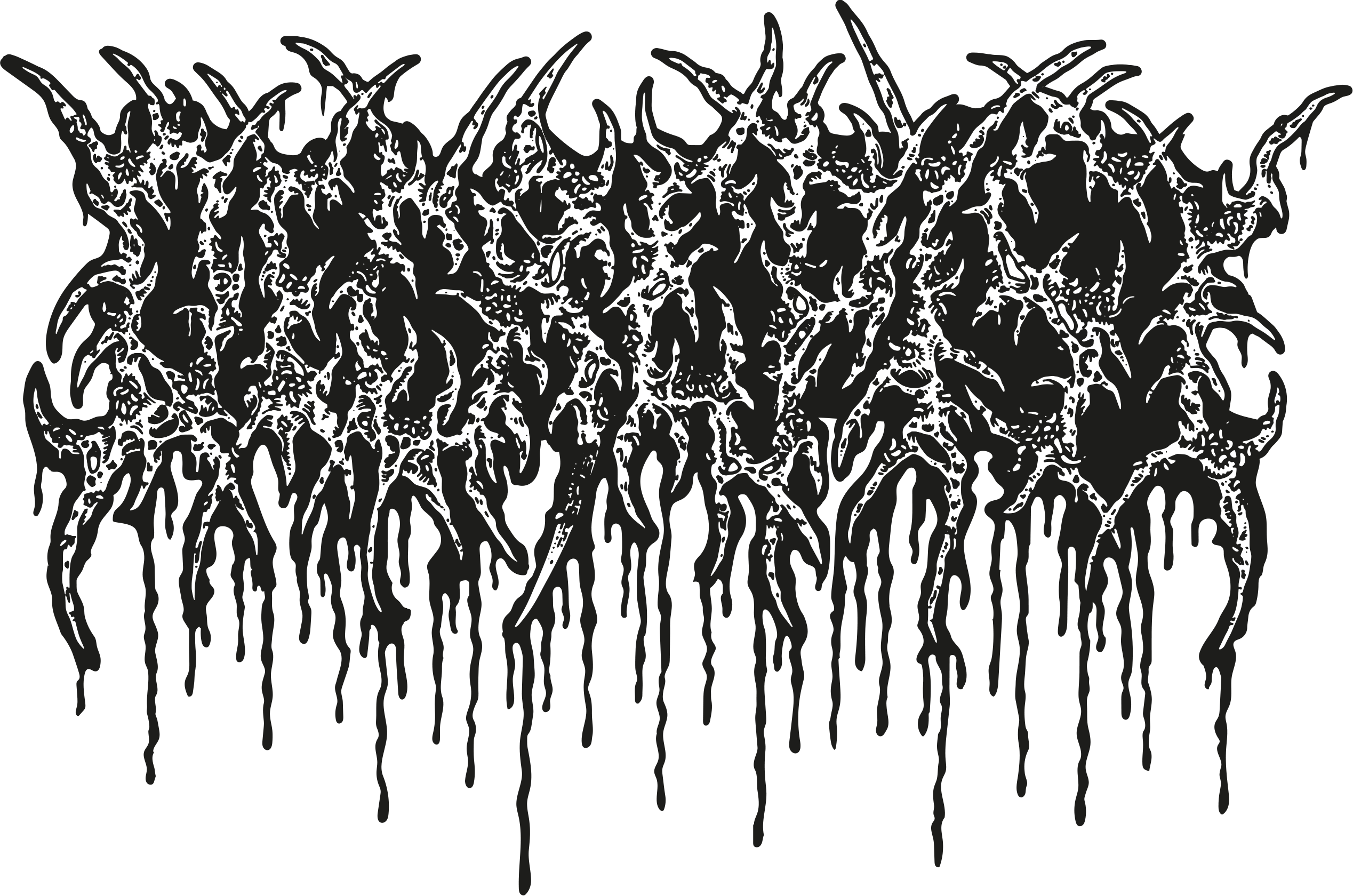 Decrepisy…keep the name in mind if Death Metal is your game. A style of Death Metal which “feels as if you came across a concealed temple, unveiling lapidified cadavers, resurrecting a ghastly spiritual entity, enduring the inevitable demise”. We have questioned main man Kyle (guitars & vocals) about the band and the debut release,  according to Tori “hands down one of THE best albums you’ll get to hear for 2021“…Kyle, come on in! (Ricardo)

I had left San Francisco and parted ways with Acephalix after 12 years. I was living in Colorado working at Dark Descent Records and started writing songs that would become Emetic Communion and came up with the name Decrepisy and the concept of the band. Before I left Colorado I was talking to Eli Wendler from Spectral Voice and Erika Osterhout of Chthonic Deity about being in the band which would have been a much different version but pretty sick. When I ended up back in Portland Oregon after being gone for over 15 years as I was looking for members I tried out on second guitar for Grave Dust. Jozy Kinnaman and I were long time friends through Acephalix and her old band Murderess playing together. Grave Dust were going through a transition at the time and it kind of naturally morphed into Decrepisy once Charlie started playing drums.

You have a fair share of experience within the Death Metal scene,  what inspired you to start Descrepisy, particularly  in this style.
Older stuff like Grave, Convulse, Abhorrence, Rottrevore, Divine Eve, Slayer, Rudimentary Peni, Christian Death and newer bands like Fetid, Mortiferum, Disma, Anatomia. I love underground culture, from Death Metal to Hip Hop to Drag Queens. You can just create what you want, be real, explore taboos, get grimey. I like the monstrosity of Death Metal, the dark depths and murky vibes. Low tuned, guttural meditative explorations. To me the most terrifying thing about being human is being trapped in a body. I relate to lyrical themes about the body and rot and decay as a spiritual practice. 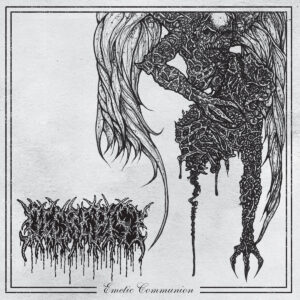 You’ve recently released your debut full-length “Emetic Communion” (CD, Cassette & 12″ vinyl released by Chaos Records, Life after Death & Seed of Doom Records), can you tell us more about it.
I brought most of the songs fully formed and Jonny wrote his solos. I really like the way Jonny’s playing adds to the sound, I don’t play like him at all and never imagined his style in the songs. I am very pleased with what he brought to the sound, to me it gives a unique flavor. The song we worked on structurally the most as a band is Emetic Communion and its has an organic flow. Hoping to get more of that on the next record. Charles Koryn recorded and engineered the album as well as played the drums. The album wouldn’t have happened as fast without him. He is a monster drummer.

I kept trying to find other artists to create the album cover concept which is based on the song Emetic Communion. Two figures embracing while vomiting into each others mouths. I ended up drawing it myself, although a very different aesthetic, it is inspired by Glenn Danzig’s Neo Classical album cover ‘Black Aria’ and Christian Death’s ‘Only Theatre of Pain’. The back cover is also based in the lyrical theme of Emetic Communion, embraced in life and death by an faceless mother, headless father.

The album was recorded, mixed and mastered during the 2020 Lock Down of the Covid Plague. We sent the recording to Greg Wilkinson at Earhammer to mix and master, he just fucking crushed it. Beyond pleased with his filthy work.

I write the lyrics, They are about genetic trauma, womb betrayal, grief, loss, rage, isolation, the body as a cage and an altar, rot and decay as a spiritual practice, the unconscious psyche, somatic experiencing, ego wired to a nervous system, carnivores being like cannibals, eating the young. The relation of eating animals to the way we are conditioned to be machines and murder our inner selves in a culture that worships money, power and violence.

They are important to me as an outlet and that they are my experience, ultimately the vibe of the music is what I’m most interested in. They are part of the whole aesthetic. 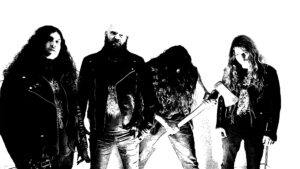 Why have you decided to record a debut full-length right away, without releasing a demo or EP first? Just opportunity or is there another reason?
We would have released a demo if we hadn’t gotten the opportunity for a vinyl release. Given the choice I will always go with vinyl. We made a tape too so the tape heads can get their fix.

You already mentioned the vinyl and cassette version….What do both formats mean to you, as a recording artist but also as a collector?
Vinyl means everything to me. It is the ultimate goal as a musician and long time vinyl collector. I bought my first vinyl when I was 7 years old, the first Black Sabbath album. I would play it on my Winnie the Poo suitcase record player and stare at the cover and imagine the stories behind the witch in the woods. I grew up buying demo tapes at shows, they are a sacred part of underground culture.

How did you get in contact with your labels Chaos Records, Life after Death & Seed of Doom Records? Did they contact you? Will they release your new material as well?
Jonny and Charlie were working with Steven Van Asch at Seed of Doom Records for their Thanamagus release and they sent him some demo tracks of Decrepisy, he was interested right away. Steven has been amazing to work with. He is a graphic designer and artist so creating the album was really a special process for me. He brought to life my vision for the artwork and I think we created a thing of beauty in a deathly way.

We wanted to co-release it with a US label so that shipping would be reasonable for people to order the album in different countries. Life After Death USA and Chaos Records Mexico both covering their territory. We are going to have exclusive shirt designs for each label coming soon.

As far as our next release the future is un-written….

What are your expectations for Decrepisy in the future? Have you already written any new songs? If so, in what way do they differ from your latest release if they differ at all?
We want to do some touring and play some festivals. We have a couple new songs written, they have their own vibe but they fit into a similar sound, definitely some more Candlemass elements stitched in.

You are involved with Acephalix as well. Or were involved?
Acephalix are recording a new record at the end of the year, first one without me. I’m really excited to hear it and play with them! 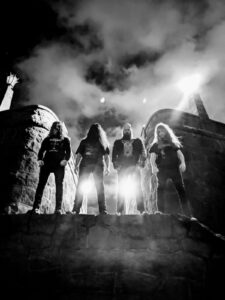 Are you involved in any other way in the music scene?
Charlie has a studio and records bands. I’ve never drawn anything for other bands, just Vastum, Acephalix and Decrepisy.

Are there any bands or albums of your recent playlist you would like to mention? Also do you have favourite labels you always keep an eye on when they announce a new release? Or a favourite illustrator?
Mortiferum, Fetid, Witch Vomit, Torture Rack, Foul, Ruin, Kommand, Disgusted Geist, Mephitic Corpse, Mortuous, Vorlust, Chthonic Deity…..Extremely Rotten Productions, Dark Descent, 20buckspin, Seed of Doom, Carbonized Records. Daniel Greeley Butler, David Mikkelsen and Yuri Kahan are killer artists.

Thanks for your time!
Thank you for your support! “Life in Decay”