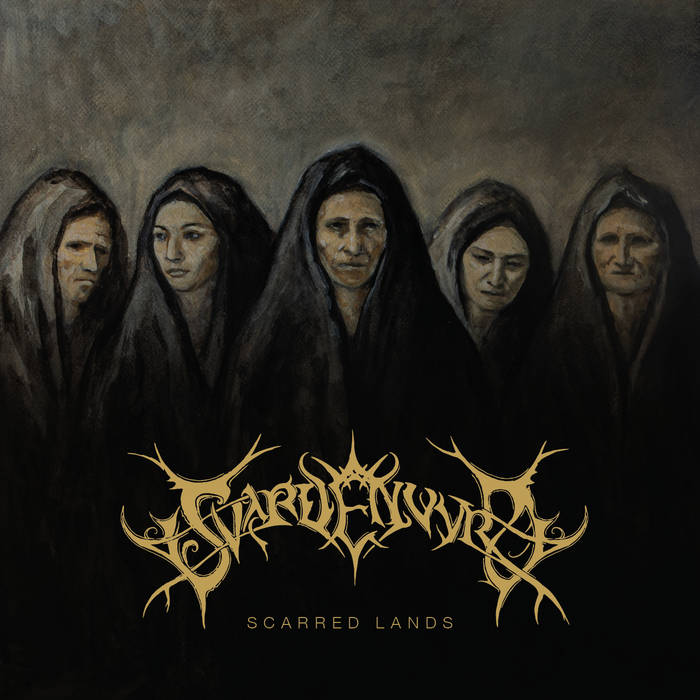 Svardenvyrd’s origin dates back to as early as 2002 and already released two demo’s, a split CD and one album in the first half of the 00’s after which the band folded around 2005. So, ‘Scarred Lands’ somewhat marks Svardenvyrd’s second coming, I can’t say I was aware of the bands’ early work, but this new album, released at the end of last year, caught my attention as it presented quite an interesting piece of Pagan Black Metal.

The ‘Scarred lands’, where the title refers to, are the Baltic States that suffered terribly under the various dictatorial regimes in the period between 1925 and 1945. The theme of this album is the inhuman suffering of the inhabitants of countries like Poland, Ukraine and Belarus and the unprecedented number of victims that fell during that period. Something that is terribly topical in the light of today, with the horrors of the current war in Ukraine by a warmongering and imperialistic Russia and the suffocating repression of the criminal regime in Belarus.

When you take the time to read the lyrics of ‘Scarred Lands’, they will give you an extra dimension to the music. ‘The Horizon Was Clear, Far and Charming’ for instance, gives you an almost poetic look into the soul of someone who witnesses the death around him, he gnaws on bones of which he doesn’t know whose they are and sees from a distance a barn full of bodies burning down. The lyrics are very well written and obviously are of a vital importance to the band. It does remind me of the similar way Primordial describes the hardships of the Irish people during The Great Famine, with that difference that the Holodomor in Ukraine was a man-made famine with an estimated body count of about 5 million.

Musically, Svardenvyrd is also indebted to Primordial, but the music of Saor is also really close to that of these Svardenvyrd – though less folksy and a tad less adventurous. This makes the music sound more Northern/Western European than Eastern European, which is a surprising observation but evidently works fine. The lengthy songs offer enough dynamics and also room for good tension building and musical variation. Without direct folk elements, but with the same flair and magnificence, this duo builds to a grandeur that musically leads to various climaxes and enchants the listener.

The heavy subject matter and dramatic expression in the music makes ‘Scarred Lands’ a grand epic that has so far received criminally little attention. Without shortchanging Far Horizon Music, it would do the band good if ‘Scarred Lands’ gets more attention and a widespread release. Unfortunately for vinyl lovers, it has not yet appeared on the black gold either, so until then we’ll have to manage with a CD version or a digital stream. But, don’t let this stop you from giving ‘Scarred Lands’ a chance. (FelixS)