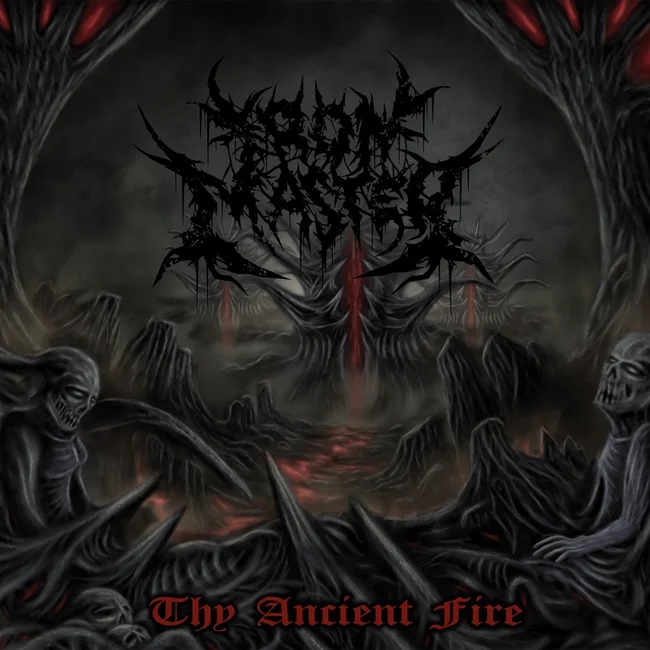 Iron Master is a sort of super group although the band members never proclaimed this for themselves. 3 long running, experienced veterans of the Swedish Death Metal scene.

You have the vocalist Roberth Karlsson (Scar Symmetry, Facebreaker, Ex-Pan.Thy.Monium, Ex-Edge Of Sanity), drumming beast Janne Jaloma (Dark Funeral, Aeon, Night Crowned) and the mastermind himself behind the production, bassist Jonas Kjellgren (World Below, Ex-Centinex, Ex-Scar Symmetry), who is also the owner of Black Lounge Studios.

The album is aptly titled “Thy Ancient Fire” because it is fiery and the Death Metal hellfire descends on us, tearing and ripping away with ferocity. Janne Jaloma blasts away at breakneck speed and the pounding Swedish Death Metal is just pure fucking Armageddon on your ears. Swedish Death Metal of the Highest Order!

The record is consistent throttling forward with some great guitar leads and somewhat this is a little reminiscent of the Great Ancient Ones from Florida (If you catch my drift). Guitars shred away without mercy with short interludes that bring about some killer leads, guitar solos with some epic melodic touches that is just right and not overdone – that soon breaks away to the Blasting and Pummeling of the beastly Jaloma.

The trio keep pushing the decibel meters to maximum hell throughout the album. Vocalist Roberth Karlsson displays his many decades of experience and proficiency growling lyrics ranging from mid brutal to all out gore and the whole album is consistently engaging the listener with no signs of toning down the intensity.

Overall the production is great and the sound is “Made in Sweden” quality, crispy clear and I have no complaints listening to this record a few times!

This is a straightforward, simple and yet hyper speed infused quality Death Metal record without much extravagance made for all Maniacs I would even dare to say that “Thy Ancient Fire” could be a contender for one of the albums of 2022 along with some other killer releases (Consumption’s “Necrotic Lust” ….)and I’ll give myself this record a few more spins!