I started my Speedkiller’s “Midnight Vampire” review with “If you put “80s”, “Extreme Metal” and “Brazil” together, you know what you’re going to get”. And the EP certainly comes up to expectations with their fine mix of the 80s South American scene and the Teutonic Thrash one, so I fired a couple of questions towards vocalist/guitarist Spellcaster to introduce Speedkiller to you and myself….(Ricardo)

Hi! Before anything, thank you to VM-Underground for the review and interview. The band started close to 2018. At the first moment, it was me (Spellcaster/Yan Nielsen), the guitarist Summoned and one other guy who was playing bass, but he quit the band and then we called Evilspirit for the place. We’re all friends since our childhood, and grew up together. For drums, we had no one and I texted Hellkrätus, who lives in Portugal, to help us with “Midnight Vampire” recordings and we decided that he would continue in the band after the EP.

To be honest, at the first moment, SPEEDKILLER supposed to be classical Heavy/Speed Metal. I was heavily mesmerized by some brazilian bands called Murdeath, Selvageria and Álcool and by Enforcer, Cauldron and Skull Fist. Also, old school bands like Exciter, Manilla Road and Saxon.  Some riffs from this phase will be present on our next releases. But when things started to get serious, in middle-end 2019, I was listening to much of Cruel Force, Deathhammer, Nocturnal and Vampire, so I decided to write our songs within this genre, Black Thrash Metal. Many people call us Death Metal and say that Mystifier is one of the biggest influences in our music, which is not true. Yes, I love Mystifier, but we definitely weren’t influenced by them. The most exciting thing in Black Thrash is the mix between darkness and merciless violence, for sure. 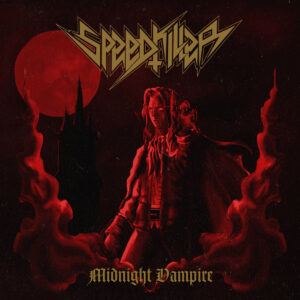 You’ve recently released your EP “Midnight Vampire” (CD, cassette & 12″ Vinyl released by Helldprod Records & Edged Circle Productions). Tell us everything about it…
Well, the first song we finished was “Nightspell’’, so we decided to record it properly. As you can see, it not worked. The single versions of “Nightspell” and “Midnight Vampire” available on YouTube and Spotify sucks, but even though, were enough to Edged Circle and Helldprod contact us. “Midnight Vampire” EP was supposed to have only 4 songs. We would use the shitty versions that were finished plus other two songs (“Valleys of Death” and “Shadowpeople”) and we even recorded them, but the mixing was so bad (even worse than the 2019 singles) that we fought the bastards from the “studio” and decided to re-record it far from they. We re-recorded the whole EP at my house, except for the drums that were recorded in Portugal, and added two other songs, Suicide/Hell, the last that were made and Circles of Blood, the first song I ever wrote, when SPEEDKILLER was a classical speed metal band. The EP was finished since April or something, so it was very hard to wait for the official release, to show the world how we would sound. Happily, much people liked it and CDs and Tapes are almost sold out.

I am the main songwriter and it includes the lyrics. Yes, some of them have histories behind. “Midnight Vampire” is about Castlevania (the cover art shows it well haha) and I wrote it while listening to Nox Arcana – Transylvania. “Shadowpeople” is about a kind of nocturnal phenomenon that our guitarist, Summoned, believes to have seen. Suicide/Hell, in the “Suicide” part, is a poem that I wrote to a contest back in school, using some “symbolism” (Brazilian artistic movement) aesthetic. The “Hell” part is almost fully from Dante’s Inferno. “Valleys of Death” is about a book I read and I can’t remember the name. The other two are just for fit in the music.

As mentioned, you have released the “Midnight Vampire” EP on both cassette and vinyl. What do both formats mean to you, as a recording artist but also as a collector?
Yes, it is VERY important. I, as a collector, do rather buy analogic formats, even more vinyl. CDs are cool and sound good (even more nowadays, where almost everything is digitally recorded), but don’t have the magic as in vinyl and cassette.

And what about the near future? Not only concerning Speedkiller but other projects/bands as well.
We’ll release a split EP very soon. Four tracks of pure Speed Black Metal, a little less thrashy. More solos, classical Heavy Metal riffs. I can tell you the songs name: “Night of the Sacrifice”, “Return of the Vampire”, “Obsessed by Violence” and a cover from Flageladör, “Anjo Exterminador”. Helldprod will release in CD and cassette I guess, but it was not discussed yet.

I can’t speak for Hellkrätus (he’s also drummer for Vectis) but I have a few projects, like Death Call (death metal), Revenants (post punk/metal) and Funeral Morbido (death metal) with an argentinian friend, Gisselle, from Apofenia (check this out!). We hope to make more songs soon and release a demo.

Are you involved in any other way in the music scene?
No, I’m quite useless haha. Apart from kiddings, I’m studying mixing and mastering (I mixed and mastered for Funeral Morbido and Revenants in the tracks available on YouTube). But at this moment, I’m only a fan, supporter and have a band.

Are there any bands or albums of your recent playlist you would like to mention? Any other bands of your region of Brazil that are worth mentioning and to check out for our readers?
A lot. Evilcult, Krushhammer, Murdeath, Schizogoat, Álcool, Sanguinário, bands from friends. I’m very into Incinerator’s EP too, “Awakened by Evil”. Also Eternal Evil. Listen to my projects too hahaha. For fans of classical American Heavy Metal and Scorpions, listen to Creatures. This band blows and I have no doubt it will be one of the biggest in the next few years.

Also do you have favourite labels you always keep an eye on when they announce a new release? Or a favourite illustrator / cover artist? Zine?
Here, most of the vinyl are fucking expensive, even more the imported from Europe and USA. But every time I have chance, I buy High Roller’s records. Also Diabolic Might, Hells Headbangers and our labels (check Inculter from Edged Circle Prod and Flagelador from Helldprod). About illustrators, check @artofdemonz and @fromhellarts on Instagram. I have no favorite zines, I love them all haha

Before we wrap up this interview, is there something I’ve forgotten to ask you which you would like to mention? Thanks for your time!
I just want to talk about our newest songs and releases. You all can expect a mix between Deathhammer, Murdeath, Black Magic, Dissection, Vampire and Running Wild! Until we release it, bump “Midnight Vampire” every single day, drink a lot of beer and destroy!!