Out of the City of Angels, Entombeds and Bolt Throwers little baby boy; Soul Devourment, fires away with “Eternal Perdition”. An album infected with grooves of such an unearthly intensity i nearly dislocated my left hip jumping up and down my living room. Utterly impressed by this exquisite piece of old school Death Metal, our ever handsome Editor-in-Chief mister Ricardo and mister Sexiness (myself), sent some life altering questions to these lads. (Franki_boj & Ricardo)

Well the band was started when one day me and Anthony(Guitar) decided to make an HM2 death metal project during a Mortal Kombat match. It really is that simple. We are just big fans at the end of the day and wanted to make some Chainsaw Riffs.

As for the other members: Tony(bass) is in Malignant. They use my house as a rehearsal space which we’ve nicknamed the “Death House”. It was only natural I asked Tony to come in on bass duties. I knew he was the Man for the job. Jeremy(Drums) is in Mechanist and Parasite. I’ve known him for sometime now and always enjoyed his style and he’s just a great guy to work with. He really knows his music and he’s fit in so easy with the band. This line up has great Chemistry.

Entombed and Bolt Thrower. Although it sounds quite obvious but are they the bands who grabbed you by the throat or appealed you to start all this or are there other bands as well?
Without a doubt it’s Entombed and Bolt Thrower. Both me and Anthony love both the bands and when we set out to do this we wanted to pay tribute as much as possible to that sound. As for the Songwriting, it’s all free flowing. Whatever comes out, is what we stick with.

As for what appeals to us about Death Metal? I think it’s simply that it’s a genre where no topic is taboo and whatever the music is about, you can feel its energy directly through the sound the bands produce. 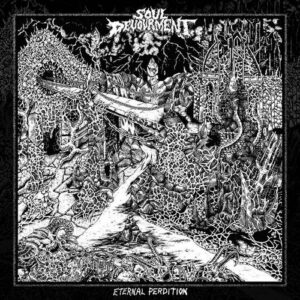 Lets talk about your debut release, the “Eternal Perdition” EP which was released by Sewer Rot Records on cassette.
The release was written in about a week and recorded in a week as well. We self produced it as we have taken a DIY approach to it all. As for the writing process, it’s very simple and rather odd at the same time. Me and Anthony play fighting games and in between matches we take turns writing riffs and we build from there. We bring it to Jeremy and Tony who put their touch on it in the end.

As for the Artwork it was done by the lovely and talented Rahma Putri Murliawanti or “Gutslaughter” as she is also known by. She’s so easy to work with. I highly recommend others work with her. She has a great talent for taking direction and making vision come to life through the power of her pen. Shouts out to her. At this point she’s a friend of ours.

Trivia? Hmm. Okay there is one thing I can say is “funny”. Since it was recorded at my house, sometimes we had to redo some takes because loud motorcycles would drive past my house and make its way into the recordings. I hate living on a through street!

How did you get in contact with Sewer Rot Records and will they release your next effort as well?
We will remain on Sewer Rot Records, we feel at home there. Chris who runs the label just is a good friend of mine and the move there was a no brainer.

As I, Franki_boj, drive my ancient Volkswagen through my hometown, blasting “Intergalactic Tyrant of Death” and “Genocidal Warlord of the Waste” extremely loud through the speakers of my car, causing severe earache on my offspring. I wonder, besides the fact that this are some pretty hilarious song titles, what the fuck are they about?
Some of the crazy fans have actually guessed some of the references. We like to keep secrets but for the sake of this interview we’ll drop one. “Genocidal Warlord of the Waste” refers to a character named Raoh from a Japanese Anime called Fist of the North Star. The show is just straight up brutal. The chorus of that song is actually sung in Japanese as well.

What are your expectations for Soul Devourment in the future? And have you already written new material?
We plan to tour and release some merch soon. We are going to adapt to the times and plan for a livestream set soon as the Corona Virus has affected the live music scene so much. We have a goal of playing in Japan and in Europe Eventually.

We have almost completed the entire next release which will be full length. They differ in song structure a bit more and we plan to make the production as powerful as possible. More Blast beats and d beats for sure. Since we are going with a bit of a science fiction theme we want the music to match. 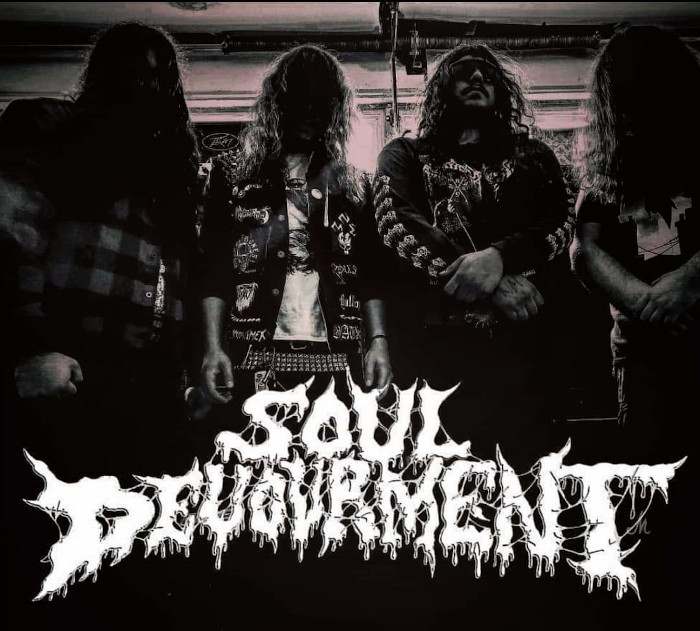 Some of you are involved with acts like Malignant, Beyond Death and Hostlov to name a few. Any news on them to tell our readers?
All those acts are working on new material. As well as Entrenched, Mechanist and Parasite. That’s all I can say for now.

Are there any bands or albums of your recent playlist you would like to mention?
For sure we are listening to Fleshrot, Inoculation, Undeath, Mortal Wound, Disrotter, Coagulate, Oxygen Destroyer, Volcandra and Phobophilic. One of my favorite releases is Coagulate’s “The Art of Cryptosis”. Please do not sleep on that one they rule.

Any other bands of your region of USA that are worth mentioning and to check out for our readers?
I’d say Malignant would label mates are a great band to check out. Mechanist as well. Coagulate and Oxygen Destroyer. These are all sick bands people should be listening to.

I’m so sorry for the next question; I could have deleted it by “accident”, but actually…it was Franki_boj’s best question so far… (Ricardo)
Don’t you think Franki_boj is a very talented reviewer and an extremely sexy motherfucker, what is your honest opinion about this question?
A great reviewer but i’m not so sure about the latter part haha!
And there you have it, now if you excuse me…I’ve to pick up the pieces of someone’s ego…never a dull moment….

Thanks for your time!
Thank you to all those who support us and please know that we plan to come even bigger and better this next record. Expect Mechanical Death.