Necrovorous – “While others were rocking out with “Far Beyond Driven”, I was buying Sodom, Exciter and Sadus cassettes”

Necrovorous’ last album, “Plains Of Decay”, will have its fifth birthday this year and not much has been heard since. But, that is not much to be worried about, says guitar player and vocalist K. Devilpig. They are just very happy with the result of their last offering and are in no need for speed. Just a quick chat to get them out of hibernation and update us about the current status and future plans of the band…

Hi, thanks for hitting up with VM-Underground. It has been quiet on the Necrovorous front the last couple of years. It seems the band was more active in the formative years than recently. Can you give us an update on what’s going on at the moment?
Hi and thanks for having us. Well, yes! When it comes to Necrovorous the band has always been subjected to the various trials and tribulations of being a band ran by people who also participate in other bands. Both me and Vag (drums) have been really active with bands such as: EMBRACE OF THORNS, SACRAL RAGE, SERPENT NOIR among others. Necrovorous played live only once in support of “Plains of Decay” and that was quite a while ago, before the pandemic. As far as coming up with new material, we feel so pleased with how “Plains…” turned out, so there is really no need to rush anything. I’ve known Vag for about 15 years  and we have come to the conclusion that spontaneity and love for music is all we care for. So no big agendas apply. Marios has also been quite busy with Sacral Rage.

Last thing that had to do with Necrovorous was Malik from Dessicated prods. putting out “Plains…” on tape. 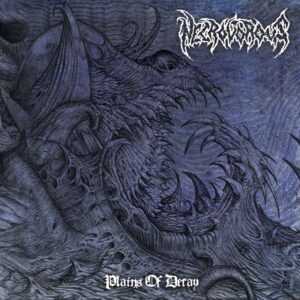 Necrovorous is, of course, not the only band that consists out of people who have few other bands and project going. Same goes for the pandemic, this struck us al land set back many bands. But I like the statement that you are very glad with how “Plains of Decay” turned out, but does this mean for the future of the band?
It would be good if a new EP or LP was recorded in 2022 or early 2023. We always have ideas for songs and riffs in the vaults. I am sure Vag has songs as I do too. I would prefer an EP of new stuff to come out, even if there is a better market for full lengths. However there is absolutely no need to rush anything.

From the start, the Greek metal scene has been a special one, with many very important and unique bands. As for last decade or so, many great bands in various genres in extreme metal stood up. How do you see Necrovorous in this landscape?
In terms of Death metal renaissance, we could have capitalized more on the retro death/cavernous death metal wave, but we don’t think it’s this we are about as persons. Both full length albums have made a sort of impact, both nationally and internationally. You could say Necrovorous is a well-kept secret.

I can agree with this. Many bands that sprung forth of what you call the ‘Death Metal renaissance’ kept it rather clean and therefore lacked persuasion. Or, indeed, the exact opposite. Necrovorous, sounds rather fresh and genuine, yet really recognizable and fitting within the death metal boundaries. How do you look upon this yourself?
I am very glad about how the band evolved. In my view we have combined our numerous influences in a very meaningful way. We are interested in song writing rather than just pummelling, which is nice and dandy, but it wears out thin really fast.

We are also interested in the much forgotten art of arranging songs, having a guitarist that can play actual leads that feel like songs within a song also helps. Perhaps Marios’ classic metal background has helped in coming up with something more song-oriented.

Now that we are speaking of other bands and influences, I know that you are a fanatical vinyl collector. What are your most recent purchases?
Not that much of metal, I am afraid, but let’s try. I got the REGERE SINISTER/MOONFALL split lp and finally Rock City by RIOT, which was the only one I was missing from their classic era. I’ve bought tons of early black/death CD’s of stuff I’d wanted for years: NECROMASS, UNPURE, DARKWOODS MY BETROTHED and tons more. I even buy tapes still.  I am also big time into prog/psych/heavy/acid rock so I got LPs by: RAMESSES, FLOWER TRAVELLING BAND, BLOODROCK, ATOMIC ROOSTER, CARAVAN, MELLOW CANDLE, EDEN’S CHILDREN. I visit record stores on a weekly basis and discogs has been my path to destruction. There’s no way back I’m afraid… 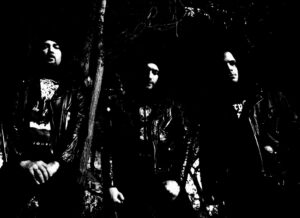 That is our collective burden, I suppose. What records have influenced you most?
Impossible to answer on a candid basis, since music has been my passion for decades. I really love TONS of stuff by rock and metal scenes and subgenres. When it comes to what I/we play there are some really formative records: AUTOPSY: Mental Funeral, MORBID ANGEL: Altars of Madness, BATHORY: The Return, SODOM: Expurse Of Sodomy/Persecution Mania, VENOM: Black Metal, DESTRUCTION: Infernal Overkill, CELTIC FROST: To Megatherion, HOLY TERROR: Mind Wars, CORONER: R.I.P, DISMEMBER: Like an Everflowing Stream, OBITUARY: Slowly we Rot, NECROMANTIA/VARATHRON: Black Arts… split LP, BLASPHEMY: Gods of War, DARKTHRONE: A Blaze …, SARCOFAGO: I.N.R.I, BEHERIT: Drawing Down The Moon, DEATH: Scream Bloody Gore, MERCYFUL FATE: Melissa. Really classic stuff and there are tons more without even mentioning the obvious SABBATH’s and MAIDEN’s.

How did these records and their (musical) influence find their way into your musical work and life?
Growing up in an era when all 3 major music formats (MC/LP/CD) co-existed, even if CD was prevalent and LP/MC were phased out, kind of helped me being exposed to lots of early classic releases that were offered as cut-outs/deleted titles. While others were rocking out with “Far Beyond Driven”, I was buying Sodom, Exciter and Sadus cassettes on labels like Roadracer and stuff by bands like DISMEMBER, INCANTATION, ASPHYX, HYPOCRISY, UNLEASHED, GRAVE on Century Media, Relapse, Nuclear Blast America  that had gone out of fashion to make way for the Norsecore avalanche.
For me, back at the time if it was fast, aggressive and evil it meant it was great. I gravitated towards the darker end of the metal spectrum even if I started out as a hard rock/heavy metal fan.

Of course all these works and a mentality that extreme metal is a very broad thing with almost endless possibilities have made me who I am as a fan first, musician second.

A step backwards, about the Greek metal scene. Can you mention a few bands from your (local) area/scene that you think we should keep an eye on?
Well of course DEAD CONGREGATION gets an obvious shout out. Also RAPTURE, a great upcoming deathrash combo. SACRAL RAGE are prog/speed masters. SHADOWMASS is great blackened heavy/speed. WAR POSSESSION, cool warlike deathmetal, SERPENT NOIR in a melodic blackmetal vein. THE PSALM, great old school death metal and last but not least EMBRACE OF THORNS which has been my baby for more than 20 years.

And, as a side step to Necrovorous, you are, as you have mentioned already, also in Embrace of Thorns and Serpent Noir (with a fresh split album with Sargeist). Is there any news that you can mention on your other bands?
EMBRACE were supposed to embark on a tour with REVENGE, MISMYRMING and ULTRA SILVAM but that went south due to Covid-restrictions and overall mayhem. The Never Surrender fest we’d also take part in, was also recently cancelled. We have recorded a new album and there is also a 7” EP coming, sooner or later. I feel very content with what the new recordings are going to bring to the picture. Needless to say that EMBRACE has been of paramount importance for me and this is not going to change soon. As for Serpent Noir, yeah the split CD with Sargeist is already out and doing quite well, if I can tell correctly vinyl/cassette versions are to be expected sooner or later.

Thanks for sharing your thoughts and background and for updating us with Necrovorous! Final words are yours…
King Fowley is god! It’s been a tough ride during the last two years and music has been always by our side to soothe, nurture, boost and help us unravel…

We still have “Plains of Decay” on both blue and black vinyl and tapes available.

Thanks for the interview and reassuring the band is still alive. We’ll be on the look out for new Necrovorous material in the future!