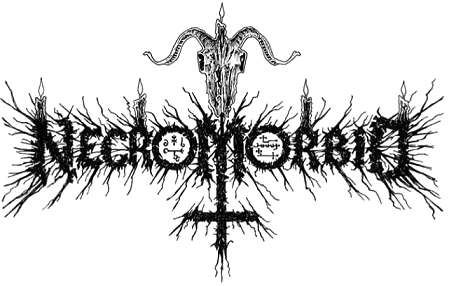 With their 2nd full-length poetically called “Sathanarchrist Assaulter”, the Italian Bestial Black/Death Metal act Necromorbid make sure the masses know they are non-compromising concerning their musical ambitions. When DPF is using references like Bestial Warlust, Pseudogod, Archgoat and Black Witchery, Blasphemophagher and Angelcorpse, fans of the genre should be alert to check it out. And while you’re checking it out, feel free to read about the band as well… (Ricardo)

Dysangelium and Bestial Desecrator have known each other since a long time, and they had some common musical experience before Necromorbid. They had a good friendship and one day they decided to rise up a band in a total Bestial Black/Death metal way, without external influences and devoted only to the black verb of the Horned One. After some months they closed perfectly the circle including Arch Commander Equinox in the line-up as bass player, and from then, the creation of the first album went down very quickly until the official release of “El Dia De La Bestia”.

The first and fundamental inspiration of Necromorbid was the glorious and infamous scene of the so called “War” Metal scene, so Black Witchery, Blasphemy, Archgoat and Revenge were the roots of our sound, but we decided to interpretate them in a personal way very soon, not emulating the past but celebrating it with new, fresh music. We absolutely adore the non-filtered, raw and genuine attitude of this genre, without melodic purpose and focused only on fury and violence, and also the satanic aspect is very important for us all.

What are your thoughts about the present Bestial Black/Death Metal scene and the position of Necromorbid in it?
As concerning the present bestial metal scene, there’s a lot of interest and move in the underground, and it seems that the historical importance of the fathers of this genre is rediscovered in the last years with the birth of countless band dedicated to it. Many of them as a very univoque and straight way to play bestial war, not moving a foot from what Von and Blasphemy wrote almost 30 years ago, but on the other side there’s some band that manages to create something new and innovative even in a genre so strict, and we like to see Necromorbid on this side of things!

Let’s talk about your debut full-length; “El Dia De La Bestia”.
“El Dia De La Bestia” remains a milestone for our history and we are still completely satisfied with it. It was recorder in our rehearsal room with professional studio stuff completely in live takes, not to loose an inch of the violence and power we spread during the recording session at the time. The production is very natural and free from elegant studio bullshit, and we enjoy it a lot even now, after almost five years! The artwork marked our first collaboration with the legendary Chris Moyen and he made a hell of masterpiece for our debut album, so that we decided to continue the collaboration even for the second album. The reactions to the album was insanely good from the maniacs that follow this shit, and we continue to receive very good feedback for “El Dia..” every day: it allows us to create a solid fanbase that support us in a crazy way, and we cannot thanks enough them and the first album for that!

You haven’t released, or even recorded, a demo prior to “El Dia De La Bestia”. Is there a reason for that?
We are not cold businessman that calculate their deeds for money or something else. We had a fury, a real musical violence to express at the beginning and we simply wrote down so many songs that could fill an entire, intense and brief full-length album, so we did. We by-passed the demo phase and we propose the finished album to the labels that were super-excited to release it without exhitation. So yeah, the reason is nothing more simple than this! 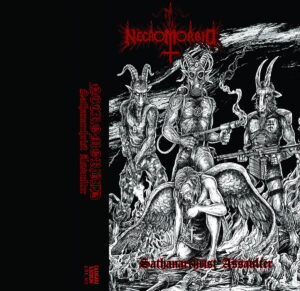 And onward to your latest release; “Sathanarchcrist Assaulter”…
“Sathanarchcrist Assaulter” is our brand new album, released by Iron Tyrant and Caligari Records. After the release of the debut, we continued without any pause to compose and write new music, in a never-ending process that made the new material very fluid and close to the old one. We had of course to promote the first album so we had no hurry in the making of the new songs, and we had the time to experiment what we wanted in the best way possible. When we were 100% satisfied with the stuff, we decided to go to Audiovolt Studio in Florence, the new studio of Lorenzo Bellia that was the producer of the first album too. He knew everything about our sound, and going there was simply the natural evolution for the Necromorbid sound that we wanted. Again, the recordings was all in live takes, with only vocals and solos recorded in a second time, and we had a very great time and no pressure during this period, letting the violence possessing the studio for three days without distractions. The sound this time is a little more produced, but keeping always in mind the chaotic, raw attitude we wanted to achieve also for “Sathanarchrist Assaulter”. At the release date, the reactions were simply amazing and it seems that the albums allowed us to satisfy the old fan and even to reach new people that immediately dig the new songs, expanding our fanbase with our great pleasure. For the artwork, I think there is nothing to add to the majestic power of this Moyen’s work: it reflects perfectly our mind vision and it appeals to the musical content in such a miraculous way that goes over my most ambitious dreams!

All the lyrics are written by Dysangelium, and of course they have their very important part in the aesthetic and concept of Necromorbid. We cannot say that they are bounded by a very concept, but in a way every album has a sort of main theme that is better explained in its sides by the lyrics of every song. The main theme of the first album was the unholy revenge of evil forces against the deity of heaven, and the description of their rising and their enpowerement. After this, almost consequentially, the new album describe the total massacre that this evil forces causes to the Holy by the hand of the Sathanarchrist Assaulter. As inspiration, I take a lot from ancient writings, cursed books and grimoires, but I like to construct them in a fictional and personal way that transcend from the reality and reach a more poetic and universal meaning as lyrics should be, in my opinion. Anyway, lyrics are very important for us, not simply a meaningless text to shout something on the music, and we take care to publish all the texts in our booklet for the ones that purchase the physical version of the album.

Personally, what do you consider as the musical difference between the two albums?
As said before, the passage from the old and the new album was very natural, very progressive and you can feel this gradual transition very clear. Of course, we grew a lot as a band in the last years, and you can hear this in the more complex dynamics of the new material, that added an important dose of depth in the evolution of the new songs. “Sathanarchrist Assaulter” has different atmospheres, more drum beats, more intricated parts and a various riffing that make the tracks simply more complete. I think that with it, we simply emphasize at the best every aspect present in “El Dia..”, adding some little more elements that makes it a complete and exhaustive album.

How did you get in contact with Caligari Records and Iron Tyrant Records?
Caligari Records is a very well-known name in the metal underground, releasing excellent stuff and with a great roster. I sent him the demo version of the album before everything else, and he was blown away by the material, proposing us a contract for the tape release in just two days! We had a great experience with him, and it was almost obvious to continue the partnership for the new album too. Same thing for Iron Tyrant Records, managed by our friend Luca Marchetti that decided to bet on us releasing in Cd format “El Dia..”and expanding the production for the new album making also an awesome vinyl version of “Sathanarchrist Assaulter”! So yes, we confirmed the same team for the new album, making our relationship with this two trusted label more solid and stronger than ever! 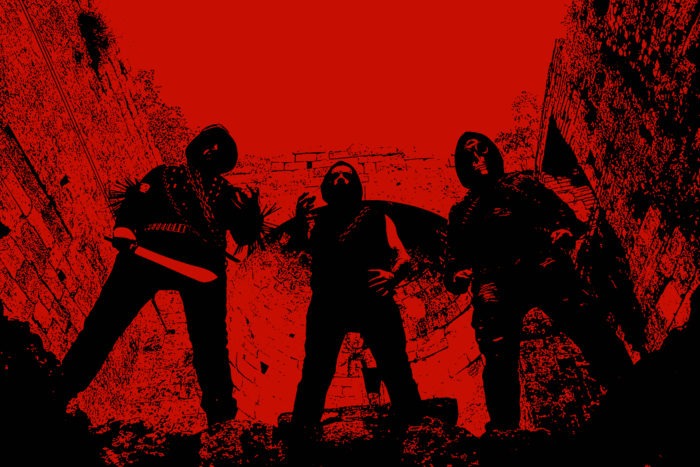 Can you tell us more about the future of Necromorbid and maybe there is some new material on the roll already?
ow, we only hope that “Sathanarchrist Assaulter” could be played live as more as possible, and that it can be heard and enjoyed by all the maniacs that loves this kind of music. We don’t do it for money and fame, and for us the contact and the feedback with our fans is everything now. We have some very great rumors coming for the next year, and we simply hope that this can be true giving always the best, in our tradition!

No, we have any new song at the moment, ‘cause we are very busy in scheduling a great promotion tour for the new album. Consider that it was released during the forced lockdown for Covid-19, and we cannot see each other even for rehearsal and it stopped our constant process of songwriting, but I have of course some tasty material in my mind that wait only to be put down in music in the next weeks! Prepare for the worst!

Any news on bands you guys are involved with, like Razgate and Sickening?
Razgate has a brand new album that really kicks asses called “After the Storm..The Fire”. Bestial Desecrator contribuited in it as songwriter and making an hell behind the drums, so be sure to check out them very soon! Sickening are writing their new album that should be out in the next year, but nothing is certain for the moment, we will see!

Any new albums or acts you would like to share with our readers?
2020 is a pure bless if you like holocaustic and devastating Black/Death metal! The new Revenge album is incredibile, so the work of Perdition Temple, Blasphamagoatachrist just to name a few. As regards Italy, I think you should absolutely check out Necromutilator, Blasphemous Noise Torment and Macabro Genocidio that are metal brothers for us and they make such a majestic unholy noise impossible not to like! Well, a tour with Blasphemophagher and Necromorbid would be incredible, but I think that the guys are not active at the moment and they are engaged in our projects. Anyway, we will see in the future, maybe this devastating combination will be real one day!

Thanks for answering my questions, I hope I haven’t forgotten anything. Thanks for your time!
We want to thank you for this great time on your webzine, and all the people that support Necromorbid with such a warm and exalted attitude. Underground metal is stronger than ever, and we have the mission to continue it and honor the tradition with our music letting the black flame of Satan burning forever and ever!