Emperium – “In our region, there are countries that imposing strict restriction of metal shows due to religion like Malaysia for example”

Filipino Technical Death Metal band Emperium are currently in the studio working on a brand new album, and they are taking their time in doing, making sure everything is just right. I caught up with the band to get their thoughts on the Filipino Metal scene, surviving the Pandemic and more. (Marksson)

Greetings to you from the UK. Thanks for taking some time to answer my questions. How is life currently in The Philippines?
We are already adjusting to the new normal post pandemic life here. The public transportation have changed but were are coping up on it in our everyday lives. The shows here in Manila is started more earlier compared to pre-pandemic era because of what I mentioned earlier. Plus many of the venues closed due to pandemic. The ones left is in outskirts or far end of Manila. We are hoping that more venues will open soon.

I was under the impression that a lot of countries in your region have restrictions or outright bans on Extreme Metal. What kind of restrictions, if any, do The Philippines authorities impose? And how do you get around them?
Yes that’s right. In our region, there are countries that imposing strict restriction of metal shows due to religion like Malaysia for example. But in Philippines, we have no any restrictions like that. It’s just metal is not mainstream here so authorities overlook or letting it in even the bands are morbid, gruesome, satanic, etc. Plus we have a small percentage of event attendee of extreme music. It’s just a community only appreciate extreme music. We are open country. It’s not necessary here to impose restriction on metal shows.

You have just unleashed a new single release entitled ‘The Majestic Goat’, and you are currently working on a new release. What details can you give regarding the new release? Will it be an EP or album? Is there a name yet? Also what kind of lyrical themes will be explored?
So far, we don’t have a title of the album but definitely it will be the name of one of our tracks. Yes it is an album consists of maybe 8 to 10 tracks I think. It will be the evolved form of our previous album. It is much more shreddier, more audible basslines and solos, and more excellent production. There will be a 15 mins long symphony inspired song. And also, a strong neoclassical power metal and more 80s power metal vibe in the works. I’m considering to stick on our dark theme on lyrics and anime references. Unlike before, we just focus on playing prowess, but now we are more focus on technical song writing and arrangement. Maybe death metal purists or metalheads wants only a heavy guitar tones will not like or appreciate our future tracks but its okay. We are bound to cross genre but still sticking into aggressive technical death metal style unlike in our previous album which is is diverse in every track.

How are you enjoying your time in the studio? Is the recording phase something that you enjoy? Where are you recording the new release? Also, when can we expect a release date?
We are just recording drums in a professional studio in the heart of Manila. After that, all will be recorded in our home studio/HQ. We enjoy this process more than we record outside because we are not worried on time we consume. We correct and polish every detail we think off in our ears. The tentative release of this release will be last quarter of 2023 or maybe 1st quarter of 2024. We can’t say final target date because we are just bound to look a good record label deal for our release.

You play a fast style of Technical Death Metal. How did your sound come about? Was the plan always to be a tech Death band or has the sound progressed through practice?
When we reformed in 2014, I already planned to introduce our band as technical death metal. But we started so rough. Maybe we can call it as ‘caveman techdeath’ haha, or lets say old school techdeath approach. Our sound progressed and able to evolve our playing in time. The techdeath scene itself also evolving so I can say we are just going with the flow but not uprooting our main roots.

How did you come together as a band? And how did you choose the name Emperium?
Me and Chok are high school bandmates. Our band started as high school band and playing battle of the bands and gigs around our area. Our former bassist named our band Emperium from the popular RPG game in 2000’s: ‘Ragnarok; War of Emperium”. Back in the days, me and him are very addicted in that game and he find it cool to become our band name haha. 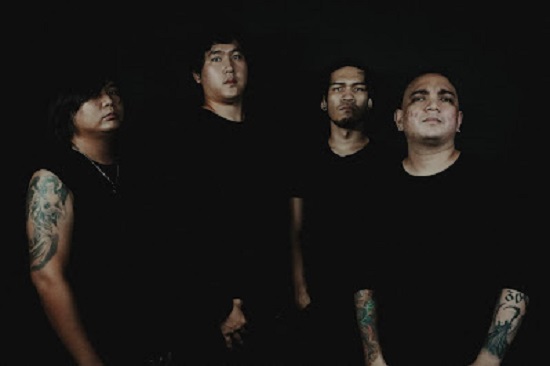 Which bands did you all grow up listening to? Which bands would you say have the most influence over the Emperium sound?
Generally speaking for our band, we have different bands we grow up listening to. But i can say, we’re all getting along with thrash metal, melodic death, and metalcore bands that we have started like Megadeth, Metallica, Trivium, Arch Enemy, Children of Bodom, etc. BUT we witnessed the emergence of modern techdeath in 2000’s thru the release of Epitaph of Necrophagist and Noctambulant of Spawn of Possession. This album is the main influence and bible of the band. Obscura and First Fragment came along because of its heavy neoclassical influence plus they are one of the heavyweights today in the genre.

Are any of the members of Emperium active in other projects? Now is your time to plug your stuff!!
As of now, our drummer have a metal side bands, Loosearms who play Death Metal and Mortalwounds plays metalcore. I also had a side project named Katubi, a Brutal Death Metal band focusing on old school BDM approach and upcoming band in the works; Abysmal God, a Melodic Black metal band. I can’t focus on my sidebands right now because we are in process of song writing for Emperium that’s why we don’t have any release on my sideband yet haha.

How about the Extreme Metal scene in The Philippines? Do you have many crazy fans over there? What local bands would you recommend?
The scene here is very much alive though the promoters are still in process of recovering because they loss a lot so much due to pandemic cancellations. Maybe in time, the scene will go back to normal again. Yes the metal events is going on here all over the country but i can say its much better when pre pandemic times, the foreign bands show is constant. Check out some killer bands here in Philippine underground: Legion, Armaros, Pathogen, Mass Hypnosia and Down From The Wound.

Thank you very much and more power!!!