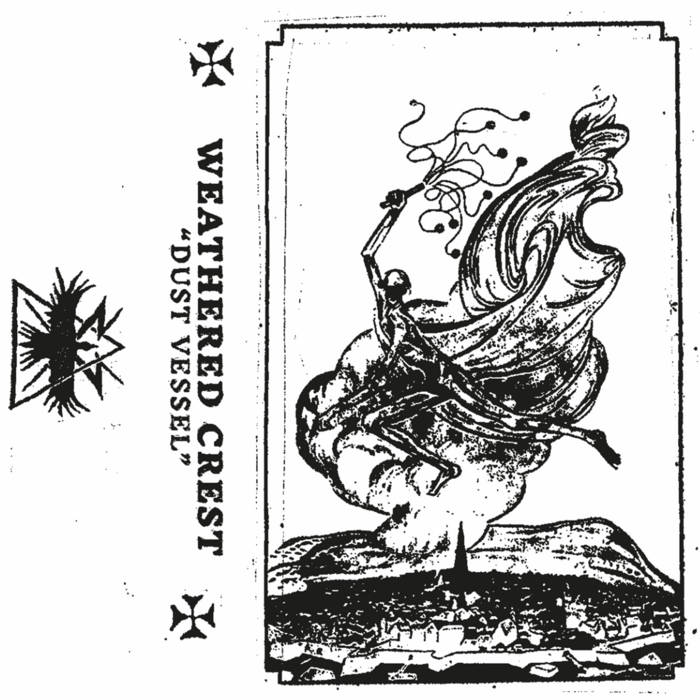 On their first EP and debut album, we were already introduced to Weathered Crest, a Raw Black Metal band from Austria that sprung from the brain of Vritra of Kringa and Brånd (among others). The Black Metal laced with primitive Punk and all sorts of other non-Metal genres remains intriguing, that is no different on this new EP released on cassette tape by Fallow Field.

Like its earlier work, dissonant Black Metal is the basis for Weathered Crest, but it is creatively built upon with various other influences. The obvious 80’s Punk vibe is again omnipresent here, and it now gets fused with the Black Metal riffs in a more vicious way than on the debut album. With this, it immediately sounds a bit more pleasant than what the band showed on that first album, ‘Blossoming Of The Paths’ – perhaps it is also due to the more limited playing time. I found the album, which clocks in about half an hour, quite an exhausting ride. That is obviously reduced on an EP, and the limit of 15 minutes might also be enough for this kind of music. The slightly edgier sound and the faster tempo also gives these songs a bit more schwung, but it doesn’t compromise on the experimental level. Some electronics are used and Post-Punk/Wave/Deathrock influences are also added. Especially in ‘Dead White Horse’, I once again hear a clear influence of Joy Division, for instance, and so it even comes close to some more modern Rock bands like Editors or an enigmatic band like The Light Of The Morning Star. This is mainly due to the ‘clean’ strummed guitar and clean vocals (although slightly distorted by the rough production). It may also be, and I certainly don’t rule this out, that my own imagination is running wild, but then that is also to Weathered Crest’s credit.