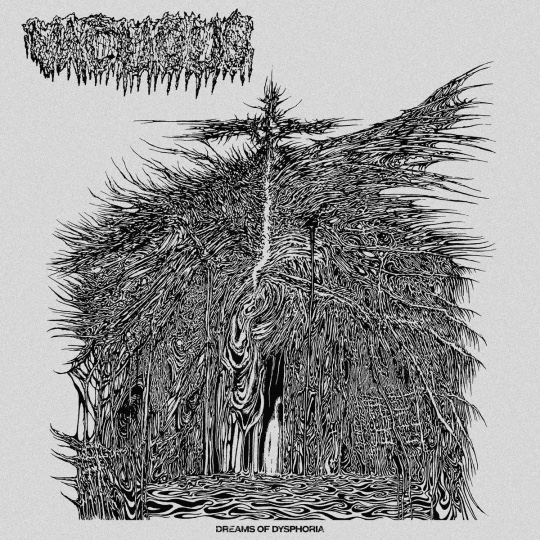 This has to be one of the most anticipated album releases in the UK and beyond if the hype on social media is anything to go by. The debut album from London based Death Metal band Vacuous entitled ‘Dreams of Dysphoria’ is also a release that I have been personally very excited about. Dark Descent in the US are handling the CD release, whilst here in the UK the cassette is being released via F.H.E.D and the vinyl by Me Saco un Ojo Records.

Opener ‘Devotion’ is a crushing mixture of furious yet gloomy vocals, slow, crawling guitar leads, down tuned and snarling, with a deeply satisfying OSDM sound emanating from both the drums and bass tones which in turns instils a certain amount of intensive groove into the overall ambiance. ‘Body of Punishment’ certainly lives up to it’s name with a faster pace and a far more ravenous streak to the ruffs, as well as some guitar rhythm added to the texture of the track that has a harrowing, fearful sound. As the place decreases, Vacuous takes on a far more menacing tone, and the riffs and drums combine to form an overwhelming cavernous pitch! On a lighter note, kudos for the use of cowbell in ‘Matriarchal Blood’, although don’t expect a softer more fun loving side to Vacuous to suddenly appear, as the vocals are at their most sinister and the drums sound out in a relentless barrage of hostile aggression. Also of note, the prominent bass play that rumbles out its vulgar tones and wandering atmospheric guitar leads that meander off into the air.

Catchy, groove laden, savagely heavy and with monolithically oppressive riffs one minute, break neck bludgeoning drumming the next, ‘Paranoia Rites’ is a barbaric slab on Death Metal nastiness that leads into softer guitar tones but more negative, unstable sounding melodies before once more blasting into punishing heaviness once more. ‘Stigmata Scourge’ is an adrenaline fuelled fist pumper full of technical wizardry on guitar whilst the ferocity abates little, before leading into an eerie, ominous sounding interlude. The album title track finishes off this superbly blistering debut album and showcases Vacuous at their song-writing best, as they build to crescendo slowly through intense grinding guitar leads, monotonous symbol crashes and punishing bass, before cruising through a melody laden bout of slick Death Metal perfection. Not much to say in summary for this album other than to say, I’ll be buying it! You should too! (Luke Hayhurst)