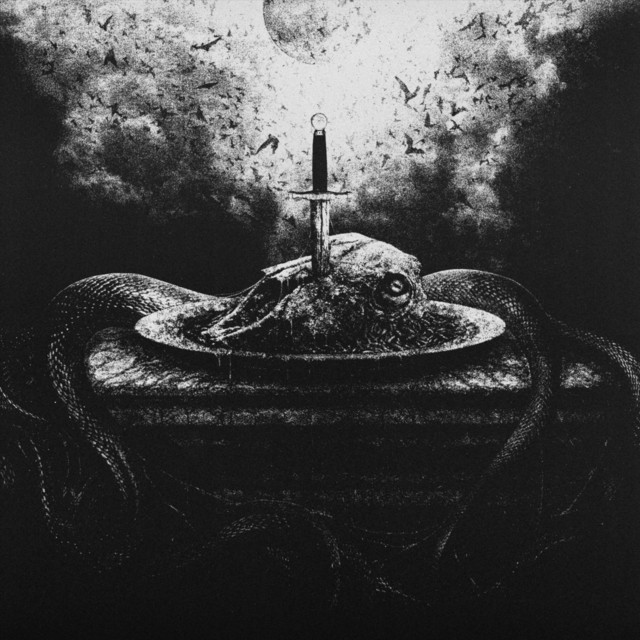 Unholy Vampyric Slaughter Sect, often abbreviated to UVSS, was formed as a solo project by Kane in 2015 and soon found its way into the underground Black Metal scene. Its popularity was soon pumped up by the now defunct Nuclear War Now! Forum where people couldn’t stop talking about this project. Despite Kane’s huge output, the created hype and the (ultra) limited editions still made it quite difficult for many to get hold of his music. Many renowned underground labels like Perverse Homage, Skjold and Crown & Throne Ltd. took helped building the band’s cult status in the Lo-Fi Black Metal scene.

This ‘Canticle Bound In Spirit The Faith In Exalted Vampyric Blood’-EP was released earlier this year, but it is not actually a new release. It’s a re-recorded version of the 2017 demo that features a new closing track. Although the tracklist doesn’t quite match the original from a few years ago, it’s the sound that gives a different twist to this re-recorded version. Where on the original the guitars sounded very raw and rough, it now sounds a lot more organic and at times even melodic. The same goes for the electronic beats, which sound more like a house party on the original and are given a less prominent role on this version. Although I can imagine that fans of the original are a bit shocked by this, the core of the demo has remained intact. Unholy Vampyric Slaughter Sect is still all about that pretty wild mix of Black Metal, Thrashy parts with the occasional Death Metal riff and the signature electronics.

For those who missed the original, there is now a chance to pick it up. But I can also quite imagine some people passing up this version, as the question is whether it really adds anything. Personally, I liked the original recordings better, they are a bit rougher and the drums louder, creating an even more unique experience – exactly what made Unholy Vampyric Slaughter Sect so special in the first place. Personally, I think a reissue of the original would have been a better idea.