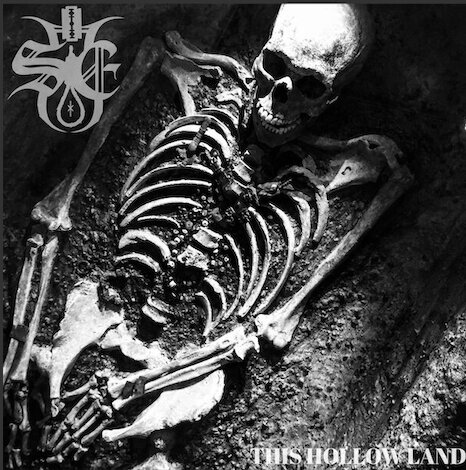 Sykelig Englen is quite a new band with sole member being Nattskog and although it was created in 2008, it already released 3 full length albums and recently an EP which is the subject of this review.

“This Hollow Land” was already released in 2019 on CD by Nattskog’s own label AHPN Records and also by Clobber Records, which released it on cassette tape the same year. Apart from that Slime Citadel rereleased the tape this year and you can also go for vinyl edition from Legions ov Darkness. You have to admit that’s quite lot of formats in span of about a half year.

Logo of the band could suggest that it will be typical DSBM as we get a razor and a rope implemented in it. Partially it would be correct. But just partially as the music of Sykelig Englen stays in mid-tempo and occasionally speeding up, but don’t expect ultra-fast blasts here. Even when Nattskog speeds up it still stays in that mid-tempo bracket. I’m not a big fan of DSBM as mostly it makes me sleepy and after a while it is just boring. What puts Sykelig Englen apart from that boring part are the melodies. This EP is filled with them till the brim and is more interesting than most of the typical DSBM albums combined.

“This Hollow Land” is like a breath of fresh air in the fossilized field of DSBM. Yes, the music is still grim, misanthropic and for average listener too “underground” but at the same time it implements great melodies and very interesting solos that at first listen seem to not fit exactly there, but the more you listen to them the more it becomes natural part of the music. They remind me little bit of the solos in Rock music of the 70s and 80s, maybe a reminiscence of bands like Black Magick SS?

I don’t want to go into technical stuff as I’m no expert in music theory but in all you get that dissonant feeling in the music. And when it grabs you it doesn’t want to let you go like slimy tentacles of the old one… Even the last, bonus track, although its little bit different (with more emphasis on the Rock side) than base ones, it is still good and in whole it’s a good closure of the EP.

I was really surprised by this EP. When I started to listen to it, I just couldn’t stop. Everything fits there perfectly so no wonder it got so many reissues on various formats. And with a 4-track EP like that, I can’t wait to hear new material from Sykelig Englen. I must admit that I know this material for a while now. I have cassette from Slime Citadel and it is regularly visiting my tape deck. If that isn’t good enough recommendation, I don’t know what is. (Sulphur)