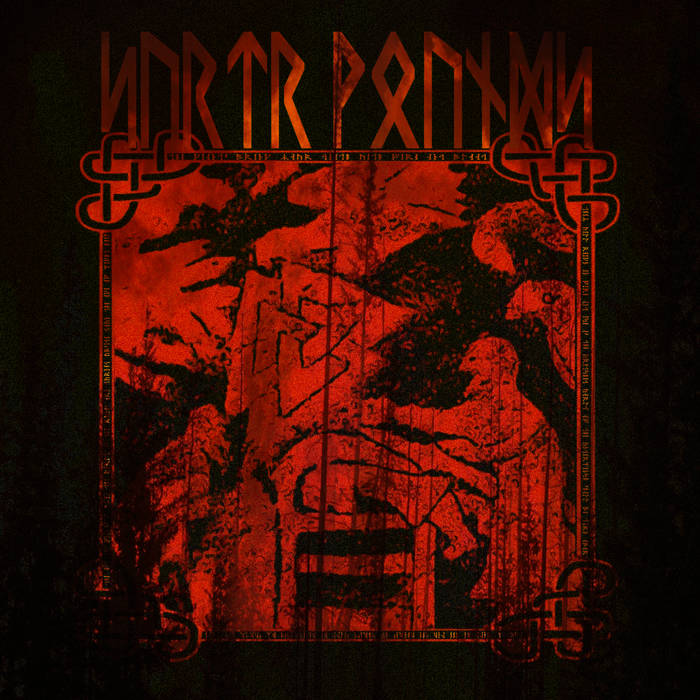 Runic rituals from rural lands, in the Runic alphabet ᛋᚢᚱᛏᚱ ᚹᛟᚢᚾᛞᛋ translates as Surtr Wounds, though I have no inkling as to what each individual track, also in Runes, translates as.

Unusually this album opens with two short intro tracks, one of brooding malevolent ambiance followed by another of droning rhythmic roars and ritualistic drums. Once things kick in properly we are treated to muffled drum beats, expertly played and rising out of the gloom to vie for attention alongside blisteringly raw howls and growling, as well as the throb of bass heavy melodies and catchy, almost chugging guitar leads. In places the album thunders along at a mesmeric tempo with a very metronomic cadence, and mired in the murk and feral Death Metal streak to the riffs. Chanted vocal work merely adds to the ritualistic feel of this album, and despite ᛋᚢᚱᛏᚱ ᚹᛟᚢᚾᛞᛋ being listed on Metal Archives as Raw Black Metal with Ambient influences, there is nothing ambient about this, and in fact there is a a huge Death/Doom element that increases as the album progresses. Still, the overwhelming atmosphere of this album is bleak, oppressive and droning Black Metal, deeply intensive and heavily layered sounds that flourish despite the thick gloom of the production. (Marksson)