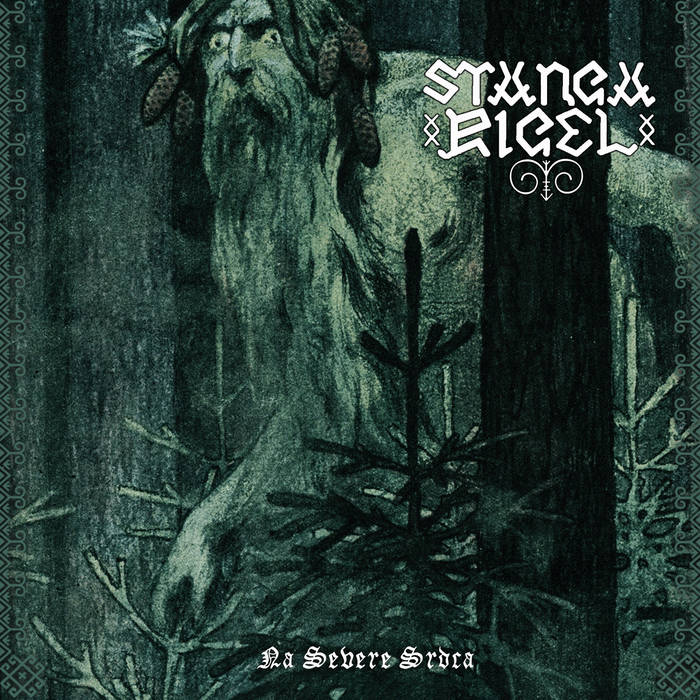 ‘Na severe srdca’ is a fascinating debut album from Slovakian duo Lesodiv and Stalagnat, collectively known as Stangarigel. Disillusioned by many modern day Black Metal bands, Stangarigel aims to tap into the more interesting themes and melodies of mid-90’s Black Metal, whilst also delving deeply into Slovakian history, folklore and nature. ‘Na severe srdca’ translates roughly from Slovak as ‘In the Heart of the North’ and the captivating cover art depicts the Slovakian forest demon Leshy, which was created by an unknown artist from the 1900’s. For their debut album, Stangarigel have tried to give their sound a more organic sound than many modern bands do, and have even kept in the odd playing error in the mix for authenticity.

Opening with soft, subtle folk acoustics, ‘Mytogenéza bronzovej doby’ (Mytogenesis of the Bronze Age) soon spreads its wings and transforms into a collage of slightly raw sounding guitar leads, ambient folk melodies, wandering expansive rhythms and harrowing, serpentine sounding vocal work. Stangarigel work their Slovakian folk influences into their sound in such a way as to avoid the cheesy nature of some folk influenced music, and so at all times this album maintains a serious sound as the folk and Black Metal elements shift and writhe so that neither absorbs the other.

Songs such as ‘Zasvätenie v slnovratnej hore’ (Initiation in the Solstice Mountain) have a pleasing mid-tempo pace and acoustic undertones, and are prone to delving into haunting, or whimsical melodic interludes. Others such as ‘Hviezdne ohne nad kosodrevinami’ (Starfires over rhombuses) have a magical aspect to them, like a carnival of sound that invites myriad instruments to join in the kaleidoscope of sound.

‘Na severe srdca’ is an album that is proud of its country of origins rich heritage and it basks in the folklore and history of the Slovak people. I’d strongly recommend wandering through a foggy forest this winter to the accompaniment of Stangarigel. (Marksson)