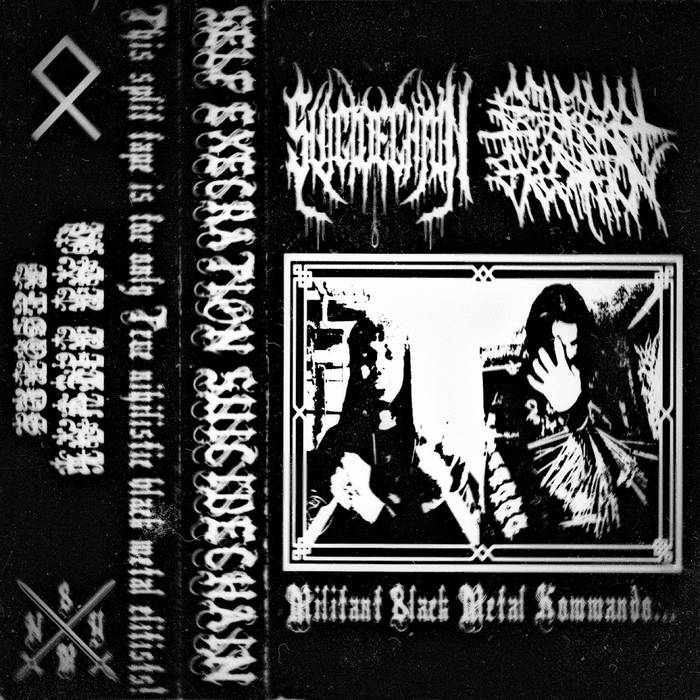 I recently encountered Self Execration’s first demo, released last September, and that’s also how I came upon this split release that saw the light of day earlier this year. Self Execration shares this split with an act called Suicidechain, about which, unfortunately, no information is available. Of course, this is irrelevant to the music, but yes, we are very curious…

Self Execration opens the split with two songs that do sound a bit different from those on the demo. I described the demo as very well-written Black Metal in which the music was stripped of all frills and was mainly riff-based. Although we can still talk about well-written Black Metal, Slutslaughterer, the illustrious figure behind Self Execration, uses keyboards that he drapes behind his riffs like wallpaper. Those synths can be heard constantly and are an important element of the music here, which takes on a slightly more late-90’s feel as a result. However, Slutslaughterer’s icy screams still give it a very definite dark touch and the raw production ensures that it doesn’t sound all too polished.

The other half is for the totally anonymous entity, Suicidechain. We are presented with two tracks from this act as well, which sound slightly fuller and louder. The emphasis here is also more on the riffs, which are, like on Self Execration, quite ingenious. Melodious and raw at the same time and all put into a production that gives all the necessary space for this. A production not too raw, but certainly not too clean either – al dente, so to speak. As far as I’m concerned, a very good first introduction to this band/act in which to wait for more music (and information).

Despite the cover-art clearly stating that this is a split tape, I am not sure if this split was actually released on a physical cassette tape. But that shouldn’t spoil the fun anyway, fans of raw but somewhat melodic Black Metal can definitely check out both bands.