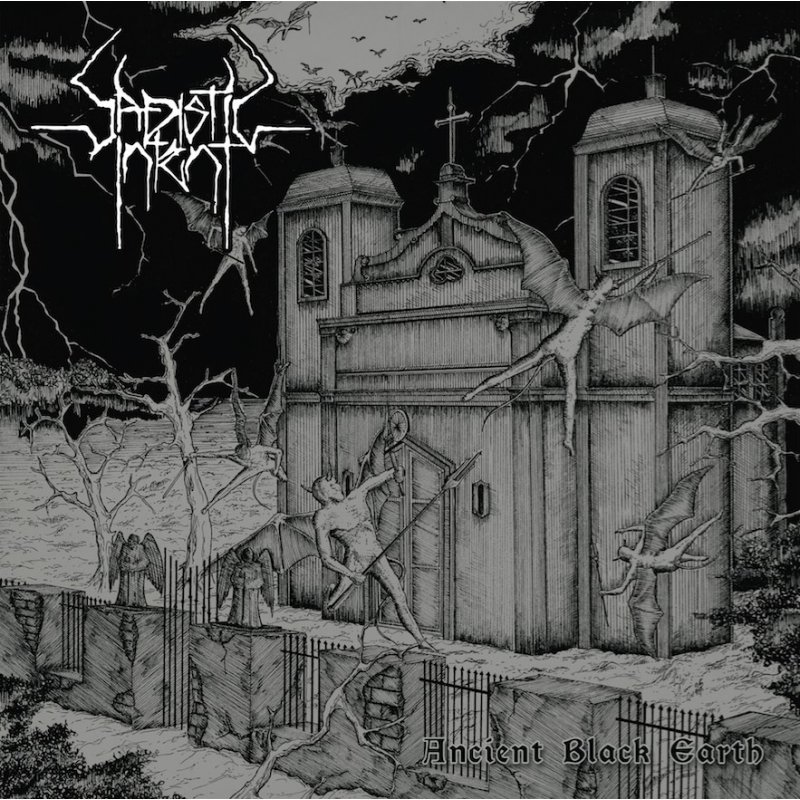 In a genre loaded with underground bands and cult releases, Sadistic Intent probably takes the crown of kings of the underground. Formed as early in 1987, the band to this day never officially released a full-length album yet is always spoken of in the highest regard. This is at least in part because of the band’s involvement in the resurrection and live formation of the legendary Possessed. But that would be taking too much credit away from the music of Sadistic Intent itself. The band has three seminal EPs under their bullet belts: The 1990 EP ‘Impending Doom’, the 1994 EP ‘Resurrection’ and the 1997 EP ‘Ancient Black Earth’. Each of these releases have become much sought-after rarities, and consequently have seen several re-releases and re-issues in some shape of form over the years. With regards to the most recent of the EP trilogy, the latest re-release of ‘Ancient Black Earth’ comes in 2022 courtesy of Dark Realm Records and Iron Pegasus Records, who have released the EP accompanied with a handful of bonus tracks on 12” LP format.

The previous re-release of ‘Ancient Black Earth’ was in 2000 (and later a re-press in 2009) together with ‘Resurrection’ on the aptly titled ‘Resurrection of Ancient Black Earth’ compilation. Instead of releasing that compilation once again, the band and labels have chosen this time to publish ‘Ancient Black Earth’ as a stand-alone release. Obviously, we find the three crushing songs ‘Untimely End’, ‘Ancient Black Earth’ and ‘Funerals Obscure’ on this re-release. These songs firmly cement why Sadistic Intent still has that iconic place in current Death Metal, as their ancient US Death Metal mix of old Slayer, Morbid Angel and Possesed is extremely convincing and, let’s face it, reason alone to own this material. The final track rounding off side A of this LP is a version of ‘Eternal Darkness’. The song ended up in a different version on the 1998 split with Ungod, but this particular recording was recorded at another point in the late 90’s. Its existence was forgotten until the band found the recording again when looking for unreleased material for this re-release. The only thing missing were the vocals, so the vocals were recorded in 2022 especially for this release. The production of the song is obviously a little bit different than the EP tracks, sounding slightly more muffled and the vocals have a bit more reverb on them, but it clearly shows the quality and consistency with which the band has resisted any form of trend in Death Metal.

On side B we find three covers: The Celtic Frost original ‘Return to the Eve’, an interpretation of Slayer’s ‘Necrophiliac’ and a cover of the Possessed classic ‘The Exorcist’ featuring Possessed vocalist Jeff Beccera. It’s not hard to see how Celtic Frost, Slayer and Possessed have greatly influenced the beginnings of Death Metal and thereby the sound of Sadistic Intent, and although these have been released on different releases over the years, it’s great to see them gathered on this re-release. The final track of the LP is ‘Lurking Terror’, a song recorded in 1999. As with ‘Eternal Darkness’, this version was long lost, and vocals were recorded in 2022 for this re-release. The production reminds me of Paradise Lost’s ‘Lost Paradise’ Record and writing-wise is clearly an older song with more of a Thrashier vibe to it, but fits perfectly in a style that has remains true to itself over the decades since the band’s inception.

The release comes in black, clear, red/black marble, grey/black marble and picture disk vinyl with a Gatefold sleeve containing a lyrics sheet with extensive liner notes by founding member and guitar player Rick Cortez. In addition, we find a few extra images, including a never used before band photo, the cover of the promotional demo of ‘Ancient Black Earth’ and a rough sketch of the artwork by Rick and Bay Cortez. This is a great addition to honor a classic underground release. If you are a fan of old school US Death Metal and you don’t own a copy of ‘Ancient Black Earth’ this should be a no-brainer. Mandatory material.