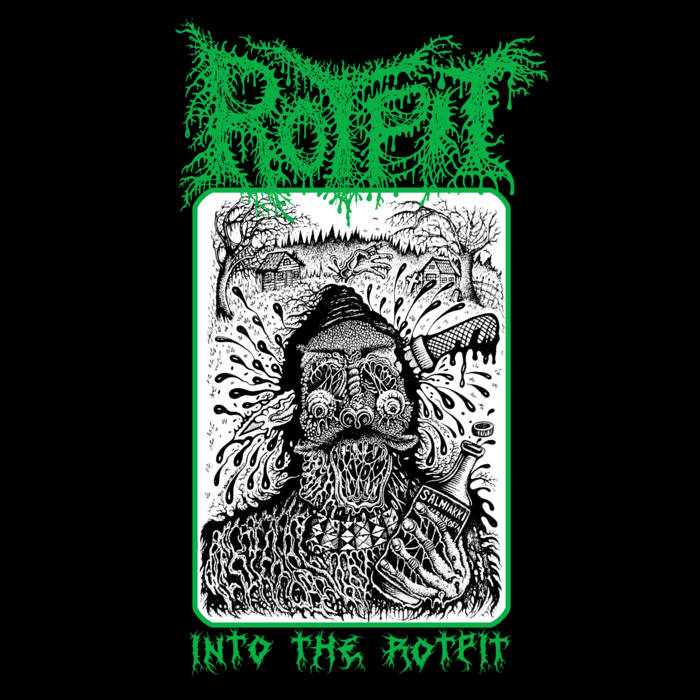 Rotpit is one of the many projects led by Jonny Pettersson, best known for his work in Wombbath, and is joined here by Henrik Posingis on drums and Ralf Hauber on vocals, both of Revel In Flesh fame. Last year they released this 3-track demo tape through Poland’s Selfmadegod Records and was finally released on 7” vinyl by Seven Metal Inches Records from Germany.

As with many of Jonny’s projects Rotpit is not quite groundbreaking or extremely good, it just delivers a very decent slab of Old School Death Metal. Nothing original and no frills. In fact it is quite a logical result of Revel In Flesh and Wombbath members teaming up, so they finds themselves right in line with a band such as Fleshcrawl. It has those grooving and chunky riffs in the slight Swedish fashion, the rolling, almost swinging, drums combined with Ralf’s hefty and hoarse vocals. There are enough dynamics in the riffing and drums and they effectively make use of well-placed tempo changes to give their song writing that necessary boost to keep themselves well above the average level of all these Old School Death Metal bands. Those dynamics come into full swing because of the rather clean production. It might, however, lean a little too much to the clean side, which makes these three songs sound a bit too polished. It might be a matter of taste, but personally I rather have this sort of music with a slightly rawer edge to it.

Though not really jaw-droppingly great, Rotpit does serve some awesome hooks and tasty riffs but mostly ‘Into The Rotpit’ benefits from the very short playing time. This giving it a very energetic and spontaneous character. I’m curious how this will play out on a full-length album as this kind of music tends to lose effectiveness quickly if it’s all too long and too much of the same.