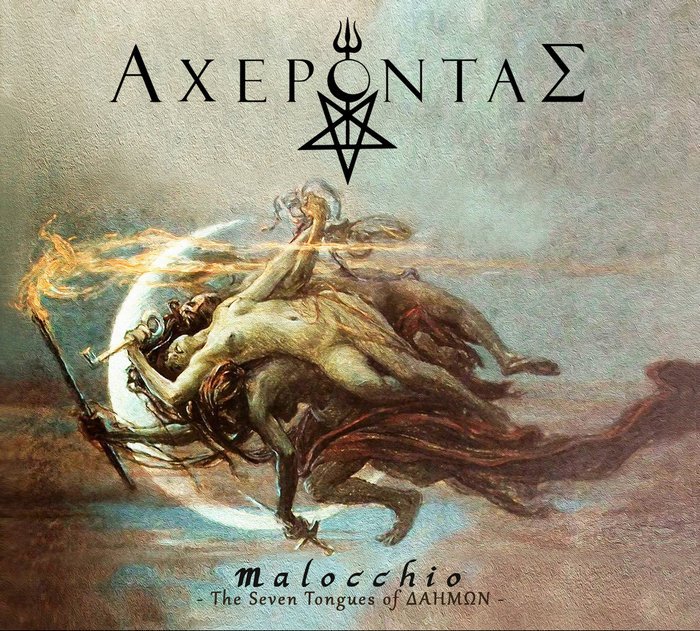 Despite Worship/Stutthof not being considered a direct predecessor of Acherontas by mastermind Acherontass/V.P.Adept, the roots of this prolific Greek band go way back to the mid 90’s. Whereas its predecessors performed fairly static and basic Black Metal, the band only really went into a creative free flight after adapting the name to Acherontas. However, it has always been one of the Greek underground’s leading bands and manifested itself considerably, not only with its many releases and thus its now quite impressive discography, but also with the band’s increasingly wide-ranging Black Metal.

With the recent name change, or rather the translation of the band name into Greek, the band seems to point out they have arrived at a new stage in the bands’ ever-continuing metamorphosis, quite similar to that of a butterfly. Where as a caterpillar it feeds on everything that presents itself, over time it emerges as a wondrous creature with profound beauty and the capacity to fly. Like that, Acherontas has fed itself of various different musical influences and now it seems to fully emerge as a grand winged Greek God.

On the last few albums, Acherontas has already shown itself to be increasingly versatile and resourceful. At times, it was audibly still searching for a way how to lay the various musical influences into an ordered and exciting mosaic. The somewhat atmospheric Black Metal is heavily laced with melodic and Heavy Metal-like guitar leads as on ‘Satan – Exaltation Of Unbeing’, doomy at times even, as heard on ‘Leviathan The Fervent Scales In Reverence’. But each time it is interspersed with up-tempo Black Metal that we have actually heard from the band since 2007. Also, the somewhat dissonant guitars and contrarian and awkward melodies are woven through it as if it were almost effortless. This makes it sound like a kind of raging maelstrom full of musical ideas, just listen, for instance, to ‘Choronzon Webs Of Alienation’, which has a grand and wild apotheosis and can be considered among these Greeks’ best work.

It may take some effort to stand tall in this thunderstorm of musical impressions. The entire discography of Acherontas already requires some perseverance and determination from the listener, which has certainly not diminished with this album. The increasingly thick Heavy Metal influences do give it a somewhat more accessible sound, but the details and depth are down there, below the surface. If you have made the effort to discover these hidden treasures, you will see that Acherontas undergoes a rare musical evolution and propels itself to great heights with ‘Malocchio – The Seven Tongues of Δαημων’. It raises the question of where this flight ends, but at the moment Αχέροντας’ creativity seems to have no end in sight and we need not fear that, in line with the Greek mythological background, they will fly like Icarus too close to the sun and their wings will melt.