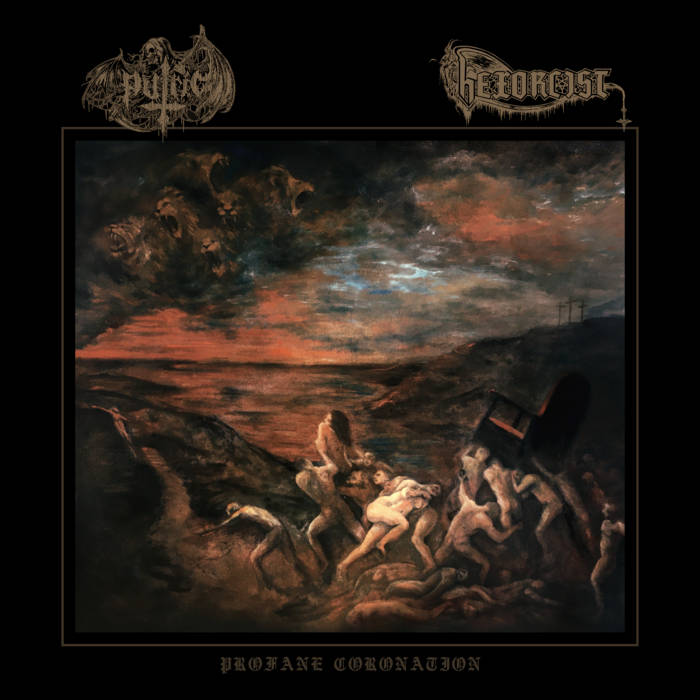 Gods ov War Productions last year unleashed a destructive 7″ vinyl split release between US Death Metal quartet Hexorcist and the Peruvian purveyors of Blackened Thrash/Death Metal, Putrid from Lima. (Ablaze Productions released the CD version) Both bands weigh in with just two tracks each for this eleven minute demonstration of darkness and hostility!

Putrid set the world on fire first with two short tracks of blazing and feral sounding animosity. ‘March Over Ashes’ is a chaotic bout of whirlwind riffs and frantic drumming mixed with savage vocals and toxic bass tones. It batters, it maims, and its an ugly bastard of a song! The same can be said for ‘The Wolf Manifesto’ which if anything only increases the maelstrom of violence and carnage that putrid seem to intent on. If you want cohesion and melody then Putrid are not for you!

And then there was Hexorcist and their opening salvo of pain and destruction, ‘Demystifying the Unspeakable’. A raw sounding battering ram of barely supressed rage and spite, Hexorcist spend their time throwing out maniacal riffs and mind bending guitar solos, and all this to the accompaniment of gruelling growls, thundering drumming chaos and the stench of primitive bass that pulverises throughout. They finish with a cover of ‘Face of Death’ by Morbid Scream and bring to a close a truly barbaric 7″ offering. Handle this one with care! You’ve been warned.