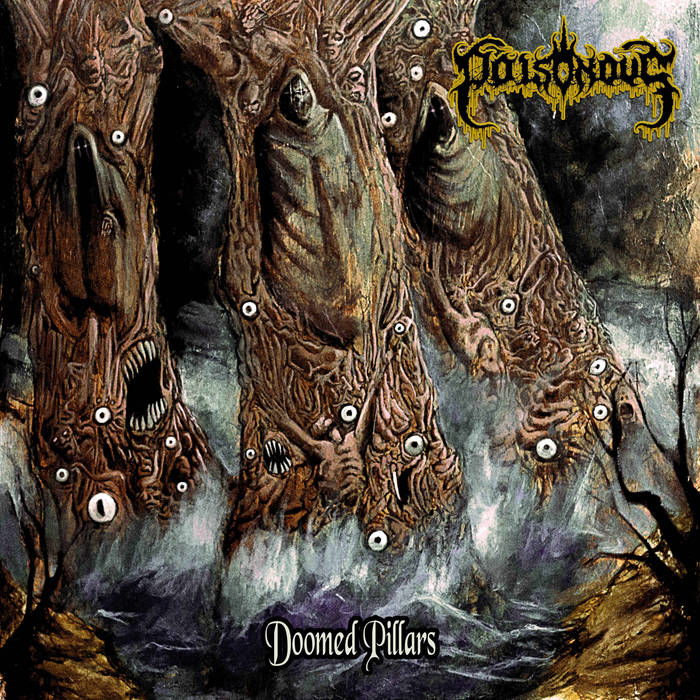 The Brazilians of Poisonous may be toxic, but it is a slow-acting poison. After their 2010 debut, ‘Perdition’s Den’, Poisonous has not progressed beyond a split LP with Daemonic in 2014 and the ‘Coronation’ 7″ EP from 2017. Not exactly what you call prolific. But, all the greater the surprise when you then come across a new EP completely out of the blue. That was this ‘Doomed Pillars’, which is released on cassette tape via Morbid Ways To Die and on CD through Black Hearts Records.

Where the debut sounded a bit dark and adorned with a nice authentic old-school sound, ‘Doomed Pillars’ kicks off quite a bit fiercer. Not that the pace is necessarily much higher, but the sound is sharper and the riffs are a bit more aggressive. The band’s main ball game is still Death Metal without too many frills and where the focus is on simplicity and energy. In that light, all previous comparisons still fit, but the band has gained some more dynamics and variety through the use of more lead guitar and (horror) samples. That dynamic is found in the sometimes Doom/Death-like pieces where the gloomy side of life is sought, but also in a super-fast track like the energetic thrasher of ‘Ceremonial Of Grave’ where a comparison with Deströyer 666′ ‘Cold Steel… For An Iron Age’ album is certainly not inappropriate. In the five years since the ‘Coronation’ EP, on which the band did display a somewhat heavier and more modern sound and production, the band has leaned back a bit towards their old style and added some new elements to it. As far as I’m concerned, on ‘Doomed Pillars’, the band sounds better and especially a whole lot fresher than on the previous two releases, and I hope Poisonous continues this line, and especially don’t wait another five years to release something new.