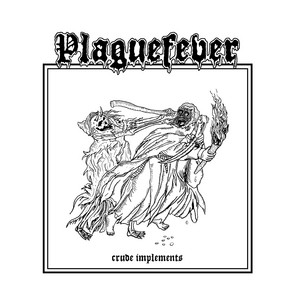 This trio from Richmond, Virginia, USA released their debut EP late last year and was picked up not long after by Elvte Kvlt Recvrds, who subsequently released it on vinyl and CD. Although the band name, EP title and artwork still seem like it could go either way, the pseudonyms under which the three musicians hide and the band photo with skulls and a scythe do give away the first hints.

G. Neglector, D. Collector and M. Infector play a great mix between first and second wave Black Metal bands containing a good dose of (British) Heavy Metal and Speed Metal. What you are basically presented with is the result of three lovers of old extreme metal. I’m reasonably sure that the respective record collections of the gentlemen include some albums by Bathory, Mayhem, Darkthrone, Celtic Frost, Motörhead and Venom. Put together, it sounds like a slightly less fierce and sleazy version of Midnight that collides with Tribulation, especially the slower ‘Cage Of Gods’ is an absolute cracker that, with crusty evil vocals and a well-placed subtle acceleration, is the highlight of this half-hour EP. The song also thrives on the atonal and almost a-musical solo that is tucked away a bit deeper into the music, but still provides the song with great epic. Of course, a tasty ‘ough’ cannot be left out either. The six tracks rock like Tribulation with an evil atmosphere where there is also room for (subtle) melody, just listen to ‘Haunt You!’ for instance. In fact, all ingredients are present and these Americans work it into a successful first EP. Fans of the aforementioned bands, but also of a band like Urgehal or Carpathian Forest can definitely take a gamble. Recommended.