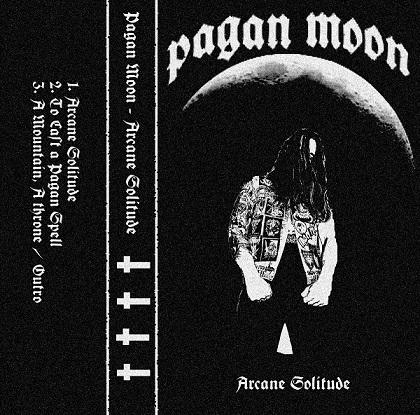 Pagan Moon is a band / project of the musician called LH from Salt Lake City, Utah. “Arcane Solitude” is his first three track demo and drew the attention of Knife Vision, who released it on their label. And with good reason. The raw Black Metal with eerie synths will appeal to many underground BM fans and collectors. I have to admit , there is variation aplenty on this demo …

Title track “Arcane Solitude” starts mid-paced, backed up by keyboards or synths in the old ominous and martial Graveland style. Cold, harsh and venomous before picking up speed, resulting in fast paced BM with haunted echoing vocals. “To Cast a Pagan Spell” is also fast and again with keyboards in the background to add that extra mystical flavour. Vocals seem to emerge from a cave. Nice touch. The guitar sound is, as required, raw and fairly simple but effective.  “A Mountain, a Throne / Outro” is the last track on the demo and the piece de résistance … 8 minutes of cold, raw Black Metal with epic keyboards.

The songs are quite solid, well-performed and well-produced for a first effort. Pagan Moon are clearly influenced by the second wave of BM, drawing inspiration from the forces and majestic grandeur of nature and anti-christianity / paganism. Main influences seem to be the earlier mentioned old Graveland, early Emperor, Burzum – the unpolished music of the early second wave of BM. No blatantly rip off nor copy, though. Pagan Moon strive to forge a style of their own. At this stage all is still a bit embryonal.

Nonetheless an excellent underground demo. Not entirely perfect, but still worthy enough to leave a lasting impression. Black Metal may be an art – it’s not rocket science. Hopefully we hear from Pagan Moon again in the near future. Enjoy the tape. (LV)