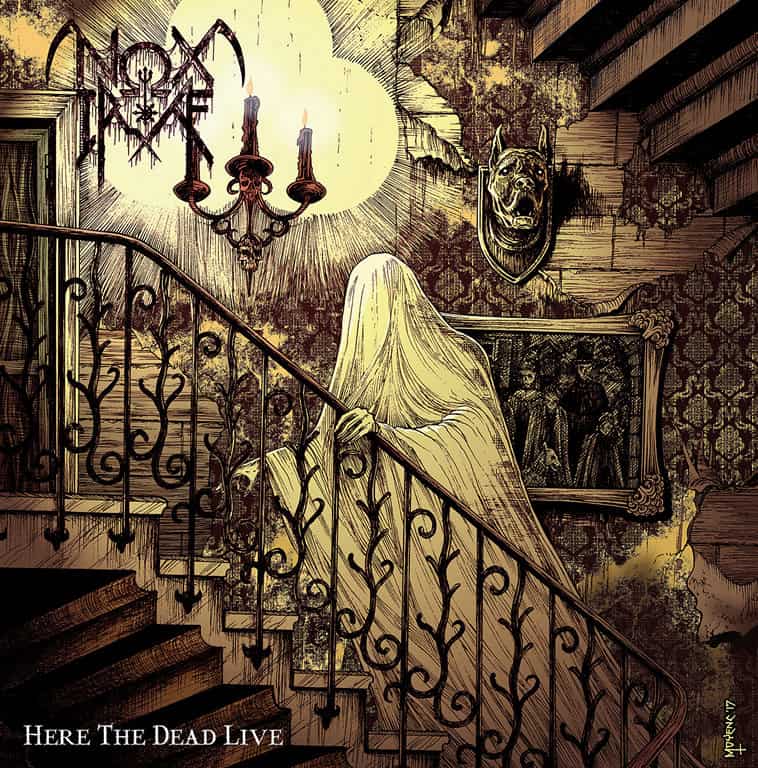 Transcending Obscurity Records have provided us with another ultra-quality Death Metal band providing their debut EP. Members from death metaller’s Affliction Gate and French Doom/Death metal band Catacomb have combined to form Nox Irae and their EP “Here the Dead Live” is hopefully but a mere morsel of things to come.

Nox Irae means night of the wrath which along with pride, greed, lust, envy, gluttony and sloth is one of the seven deadly sins, with wrath being summarised as strong and vengeful hatred. Now that you have this information, I really won’t need to get to deep in explaining this EP. Pretty sure that the information provided will give you a sense of the brutal and intense theatre that is provided herein.

All 6 tracks on “Here the Dead Live” mercilessly carry you along this enthralling and impressive journey. Not only will it make you sit up and take notice, it gets in under your skin and makes you feel every note, chord, drum beat and death growl vocal like getting hit on the head, not once but numerous times with a lump of unsanded 4 x 2 with rusty nails bent over in the timber to provide the blood loss. Yea, it hurts, however when this finishes you will instinctively lean forward and hit the play button for more relentless punishment.

“Phantom Parasite Trauma” is an aggressive and powerful cacophony of all instrumentation including the vocals which then settles into a flesh ripping rage that is oh so Bolt Throweresque heavy and that’s just the first track. “All Is Over” leaps straight at you like some crazed mutherfucker that just wants to hurt you for fun which then leads us into “Knife Under Throat”. The bell tolls once in the beginning of this and then it will melt you face with chugging riffs, fiercely aggressive drumming and vocals that scared the shit outa my neighbours so much that I had to tell the boys in blue that no, no-one was being murdered in my house and the growling they heard wasn’t a blood sacrifice.

“Cold Wind” and “Primordial Lie” both provide the same violent and guttural vocals, lead breaks and chunky riffs along with uncompromising percussion and blast beats that are provided in the previous tracks and then we come to “Supposed Dead” which is nothing like the title suggests. This is a hostile animal that lives and breathes through rises and falls in tempo with the heartbeat being the uncompromising composition that provides this creature with pure rage and viciousness.

So my friends, if you want some of the best old school Death Metal that you’ve heard in a very long time and everything that comes with it, wrap yourself up in bubble wrap and have your region’s emergency number at the ready.”. Trust me, once you’ve heard Nox Irae’s “Here the Dead Live” your gonna need it. (Longstretch)