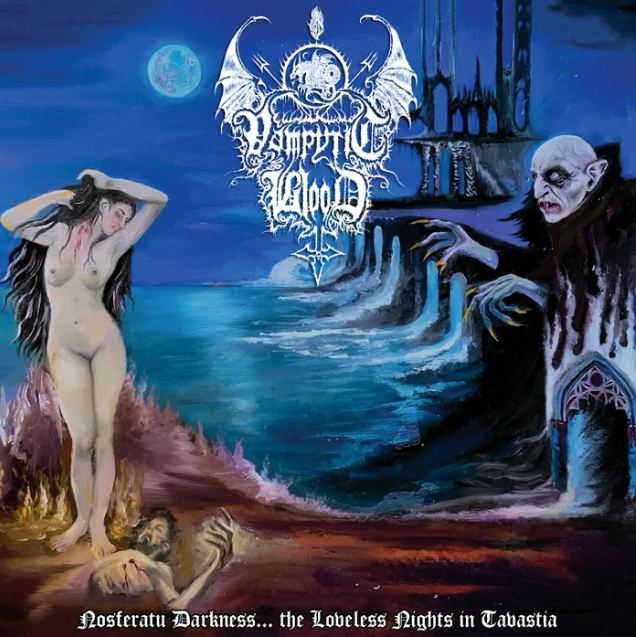 About five years ago, hypes in the Black Metal scene were whipped up with great regularity via the Nuclear War Now! forums. These included internet battles to get copies of the Danish Skjold label, a particular vinyl version (with or without 7″) of Vargrav’s debut album or the countless limited cassette tape releases from one of the many underground tape labels of the time. Now several years on, and hopefully somewhat sobered up, we can look back on that period. I am sure there are some people scratching the back of their heads and wondering how they could have gotten so carried away and paid those astronomical sums for those simple tapes with a xeroxed covers or those half-arsed Livor Mortis LP’s.

While many bands were quite good and at least blew new levels into the Black Metal genre, one can wonder whether that buzz was really justified – quite apart from the sometimes more than 100 bucks paid for certain titles. It is therefore rather funny to see that, although vinyl albums usually tend to be fairly stable in value, the value of some of them has dropped dramatically. Safe to say that the so-called “Discogs record flippers” have hit their stride and thus managed to fund their own collections. Besides bands like Lampir, Orgy Of Carrion, Sanguine Relic, Carved Cross or Obskuritatem, Australian Vampyric Blood also became a topic of discussion.

This one-man act from the stables of Dark Adversary Productions already scored high with its debut ‘Ordo Dracul’ (2012) and follow-up album ‘Howling In Candlelight’ (2017). Both albums were released on vinyl in 2017, followed a year later by the vinyl version of the split with Drowning The Light. This triptych marked the culmination of the hype surrounding the band, again largely stoked by the Nuclear War Now! Forum and the rise of “Black Metal influencers” on Instragram (unholy shit, how did we get this low?). The musical value of Vampyric Blood was not necessarily of that level that you would expect a hype around it. While far from bad, Lord Of Shadows (the man behind Vampyric Blood) seemed mostly concerned with making music that was close to his heart. Classic 90’s-inspired Black Metal, without too many frills where his penchant for romantic 18th-century ghost stories and gothic novels play the leading role.

With Vampyric Blood, it is always a bit of a question whether the music is the core or whether the subjects sung are. The subject matter may be abundantly clear: it involves vampires, werewolves, full moons, bats and ruins. But Lord Of Shadows’ limited musical talent sometimes suggests that his love for Victorian horror themes are guiding and the music more of a frame. Incidentally, this is far from a disqualification, what Lord Of Shadows lacks in musical ingenuity it more than makes up for with a good sense of drama and atmosphere. The melancholic sound, atmospheric keyboards and haunting interludes combine to form the highlight of ‘Nosferatu Darkness… The Loveless Nights In Tavastia’. Just as it did on the previous albums. The production is a bit brighter than on the previous album, ‘Howling In Candlelight’, though, which detracts a bit from the atmosphere on one side, but gives the individual instruments a bit more space. Expect no hyper-speed blast beats, hypnotic and repetitive riffs, amazing drum fills or long drawn out soundscapes, just plain and simple melodic Black Metal stripped off all the musical acrobatics of many of today.

Exactly because you won’t easily catch Lord Of Shadows doing anything innovative or using other unexpected elements, it puts Vampyric Blood in its strength. This new album is therefore completely in line with the previous recordings. I personally do prefer the more subdued atmosphere of its predecessor, because of its more sinister feel. But this album, without any doubt, can proudly wear the Vampyric Blood logo. Dark Adversary, run by Drowning The Light’s Azagorh, would do well to just release this album on vinyl as well. With or without forum hypes, I am sure this album will once again please the Black Metal connoisseur.