Nocturnal Depression – When My Time Has Come [EP] 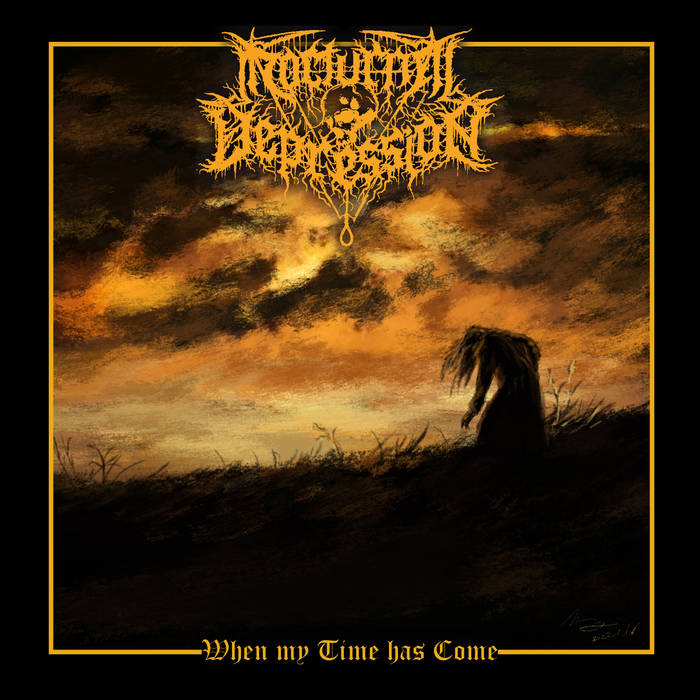 When I first encountered Nocturnal Depression, a Depressive Black Metal band from France, I was not quite impressed. I have always thought that the term of ‘Depressive Black Metal’ a bit dubious, in my eyes Black Metal has never been a joyous sport to begin with. The vast majority of Black Metal bands sing of total misanthropy and the collapse of human existence. So to then add ‘depressive’ to that is a bit pleonastic. OK, in the current Black Metal scene there are bands like Alcest and Laster, who have a very different mindset, all good, but that’s still very much an anomaly. Being not the biggest fan of this particular sub-sub-genre and the first offerings of these French being rather underwhelming, I haven’t paid much attention to them afterwards except for a few songs and a split release here and there.

By accident I ended up listening to this new EP from earlier this year. I kind of tried to approach it without too much expectations, but, guess what, I was kind of pleasantly surprised. This EP has a new song, the title track, which was taken from this duo’s upcoming new album, a re-worked song from their ‘The Cult Of Negation’-album from 2010 (Avantgarde Music) and a song that goes by the name of ‘The Dead Dreamer’. While listening to this EP a few times, I think might have wrongly ignored the band for a while, but it is also clear that the older songs are not half as good as their current songs. Which is, of course, a good thing to notice, as it means that the musicians have progressed as song writers and their music became much more interesting. The title track is a good example of a long-drawn out song with lots of adventurous yet melancholic melodies against a curtain of blistering Black Metal riffs. It also has a slightly progressive slant to it, which makes it sound not too far removed from many other bands that sometimes go under another tag that I am not too fond of, ‘Post Black Metal’. Yet, Nocturnal Depression is rooted in Black Metal deep enough not to start shoegazing.

Although I cannot say that I have fully embraced the Depressive Black Metal genre as a whole (yet), but I have had to adjust my opinion about Nocturnal Depression a bit. It’s certainly not as bad or objectionable (anymore) as I had in mind and it has sparked my interest in that next album.