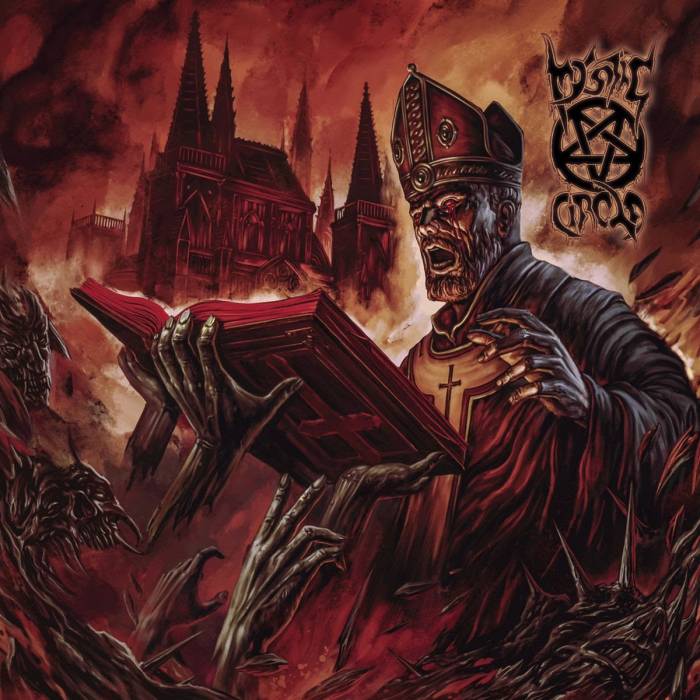 It sometimes happens that even though you think you are prepared for everything, life surprises you. Who, for example, was thinking of a reunion of the German Black Metal band Mystic Circle? Not me in any case. The band’s history is full of everyone’s opinions. Many will still have the band’s pictures on early albums like ‘Morgenröte – Der Schrei Nach Finsternis’ (Last Epitaph) fresh in their memory, which caused a lot of hilarity and laughter. In fact, Mystic Circle and their label Last Episode (the later name of Last Epitaph) have come to symbolise everything that was wrong and pathetic about 90’s Black Metal. Especially in those days, the commercialisation and ridiculing of Black Metal was seen as an unacceptable blasphemy, Mystic Circle was pointed out as one of the main culprits. The (somewhat) mediocre Symphonic Black Metal that the band performed certainly did not contribute to this either.

This sentiment certainly lasted until the early 00’s. That was also the time that Mystic Circle traded in the bankrupt Last Episode for the bigger Massacre Records. Although Last Epitaph had a rather dubious image, Mystic Circle had a rather commercially successful period on that label. This was not continued with the label change to Massacre Records, also because of the change in style of the band. The Symphonic Black Metal was exchanged for a more Death Metal sound and the band distanced themselves from the old image and lost the war paint and the spikes. However, the band has never been able to shake off the taste of kitsch and the childish early years. The mediocrity of the four albums under Massacre Records were hardly of any help here either – with ‘The Bloody Path Of God’ from 2006 as the provisional low point. In 2008, the curtain fell on the band.

Fast-forward to 2022 and ending this retrospective, we are already at the band’s 3rd reunion – so in that light I shouldn’t have been surprised. The band announced their return in the form of the ‘Letters From The Devil’ 7″ EP (Atomic Fire) that was released at the end of last year. On that EP we could already hear that the musical course had been changed back to the early days of the band. The band has been brought back to the duo of Aaarrrgon and Graf von Beelzebub, besides their pseudonyms, the black and white paint is back as well.

For those who like it, the eighth album is again full of satanic symphonic black metal. To start with the conclusion, ‘Mystic Circle’ is a surprisingly good album. When you are able to get rid of all preconceptions and such, there are some enjoyable moments here and there in their old work, but I did not expect an album like this one. The sound is very full and convincing, which makes the bombast and fast Black Metal come out well. It is also noticeable that the music is much better balanced than in the past, the keyboards now play a good supporting role and have left the leading part to the tightly played drums and the much better sounding vocals of Graf von Beelzebub. The guitars are a bit in between, but offer enough melodic fury to keep it all together and create this big epic wall of sound. Of course, this musical formula is not exactly modern or original, but it is played with enough passion and penchant for the 90’s sound – which fortunately has been fully embraced again – to be convincing. This means of course that fans of Black Metal from the stables of for instance Black Gangrene and Skjold can walk past this without looking, but everyone with a soft spot for ‘that old sound’ can, if they can get over their own diffidence, give this album a try. I mean, if there is a place for bands like Dark Funeral anno 2022, there should also be enough room for Mystic Circle’s music.

The question is of course whether Mystic Circle will ever get over their youthful sins, some things in life are easy to cause but hard to undo (if you even would consider doing so). Musically however, this album offers the band a fine return and the German twosome has nothing to be ashamed of this time.