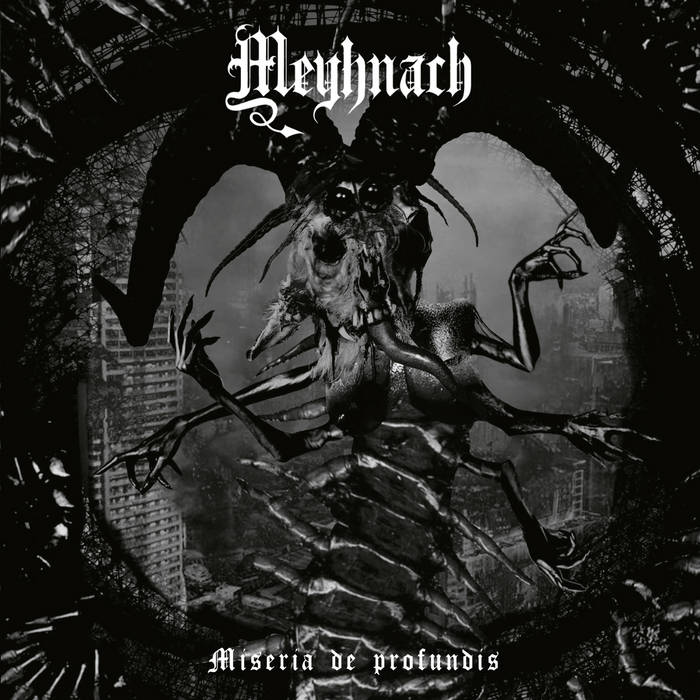 One of the most appealing and leading figures of the French Black Metal scene is undoubtedly Meyhnach (although I think his mother prefers to call him William). With his now second album under his ‘own’ name, it’s a good time to take a look back at Meyhnach’s more than three decades-spanning and turbulent career.

In the mid-1990s, he was one of the pivotal figures in what is called the Les Légions Noires, a group of musicians/friends who formed dozens of bands in ever-changing formations centred on Black Metal and (Dark) Ambient. Meyhnach’s band, Mütiilation, would become an iconic cult band in the (French) Black Metal scene, but it also produced a number of other very interesting acts, such as Torgeist, Belkètre and Vlad Tepes. The other bands or projects from this elite circle are significantly less interesting and in some cases downright bad.

With Mütiilation, Meyhnach experienced several phases, the first of which, from its formation in 1991 to the band’s dissolution in 1996, is the most startling. During this period, the bands’ 1994 demos and EP, ‘Satanist Stryken’, ‘Black Imperial Blood’ and ‘Hail Satanas We Are The Black Legions’ respectively, were the run-up to and provided the basis for one of the ultimate classics of French Black Metal: ‘Vampires Of Black Imperial Blood’ (1995). In the period between Mütiilation’s first demise and their resurrection in the year 2000, the ‘Remains Of A Ruined Dead Cursed Soul’ LP was released by the leading End All Life label. This was an unreleased album that should have actually seen the light of day in 1993. The first 60 copies of this LP were stained with human blood to make it all just a little more dramatic and not only enhanced Mütiilation’s cult status, but it also marked the end of a musical era.

Mütiilation’s second coming saw the band return with only Meyhnach behind the wheel. In fact, the band had become a solo project of Meyhnach, but that was not the only major shift, musically he also took a different approach. The misanthropic Black Metal now featured an extremely cold and almost industrial sound, largely due to the icy production and programmed drums. Although many die-hard fans turned their backs on Mütiilation, most of the albums are still of solid quality. Yet Meyhnach once again carried the project to the grave in 2009, only to be re-resurrected five years later. Although no new recordings were released during this period and the band had only done two live shows in 2001, the only noteworthy moment (a downright low point, actually) during this phase of the band’s career was the performance at Hellfest 2015 with Doctor Livingstone as Meyhnach’s backing band (I wouldn’t recommend you watch it). In late 2017, Meyhnach buried Mütiilation for good, at least…

That same year, 2017, Meyhnach treated us to a solo album with his own mug on the cover. While it wasn’t a bad album by any means, the question is whether it was really necessary to end Mütiilation and continue under this name. With a little imagination the songs could well bear the Mütiilation moniker. The musical direction had only shifted minimally and this shift was certainly no greater than that between the first and second phase of Mütiilation. Fans of the gritty, slightly industrial Black Metal of the last Mütiilation albums could do just fine with this Meyhnach debut. It was a bit harder to digest and requires some perseverance and stamina, but those who got through it were rewarded with an extremely dark and quite disturbing album.

Why this, more than, comprehensive retrospective? Because fully dissecting this new Osmose Productions released record will say less than the entire run-up to it. Sometimes a musical context gives a clearer picture of what to expect than a full analysis written out per riff or song. ‘Miseria De Profundis’ certainly is one of those.

The first thing to notice when listening to this new album is that it is a little less impenetrable than the previous one, although the atmosphere is still just as sinister and uncomfortable. This comes across well, for instance, in ‘Relapse’, which is placed halfway through the album and again delivers that eerie feeling that some of his best albums from the second period did. I think this song best captures the essence of the whole album and also perfectly matches the almost Lovecraftian or Clive Barker-esque artwork, that paints an equally distressing picture. ‘Miseria De Profundis’ not only lives up to its artwork, but also its title, and it fits seamlessly within his discography of the last 20 years. While it doesn’t generate the same enthusiasm as, say, the moment I opened the package and put ‘Remains Of A Ruined Dead Cursed Soul’ on the record player for the first time, a good 20 years ago, Meyhnach is still able to trigger a certain curiosity.

So, wrapping this all up, ‘Miseria De Profundis’ too requires some tenacity from the listener, this is still no Watain-like easy listening Black Metal that is full of catchy hooks and harmonies. It may, again, not be for everyone, and although the French Black Metal scene is getting bigger, more interesting and better by the year, Meyhnach proves that he still has something to offer.