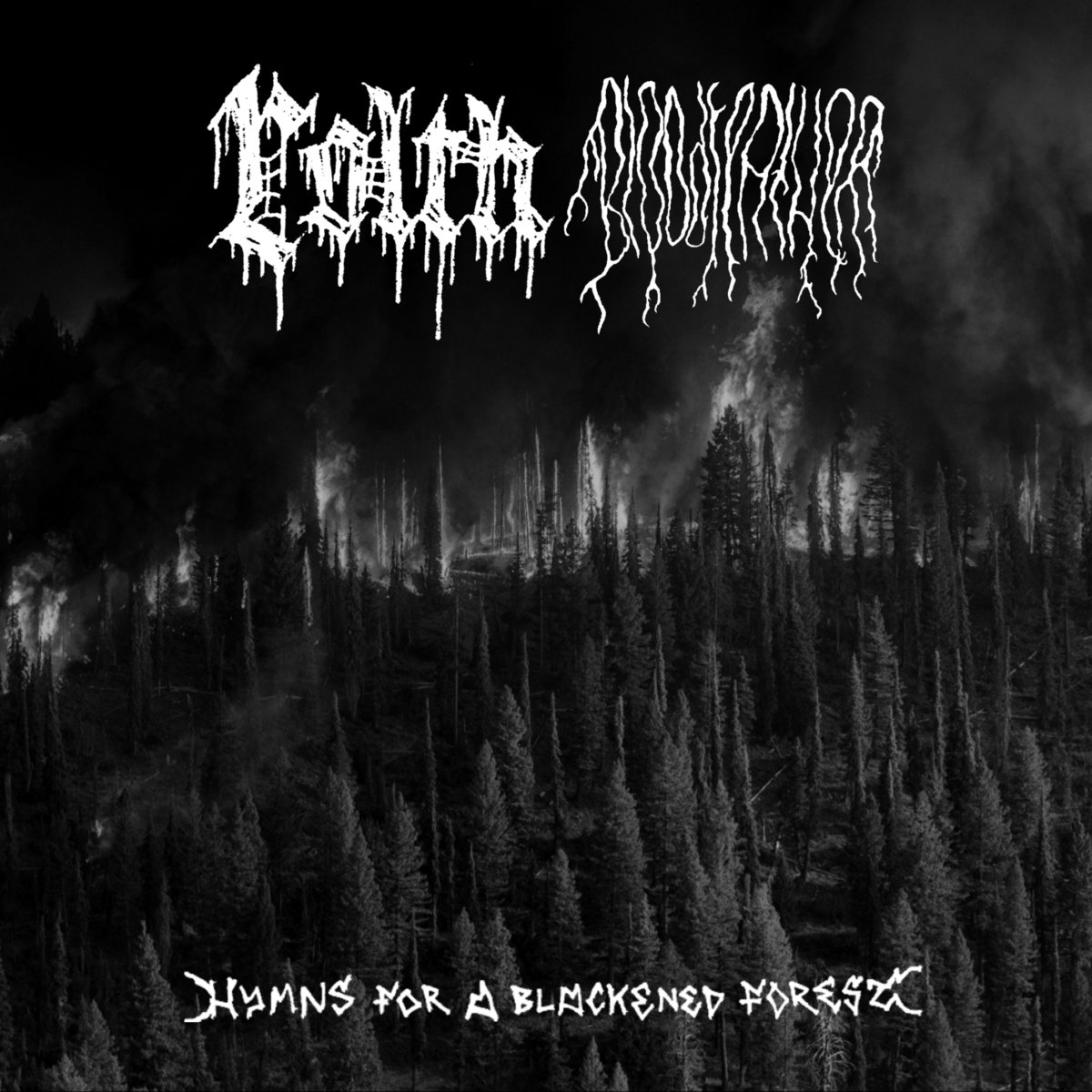 With a title like ‘Hymns For A Blackened Forest’ you might archive this one directly amongst all those other forest dwelling bands, taking their hikes into the foresty mountains and do some field recordings to incorporate in their next obscure demo. Well, this is only partly true for both of these American single-person driven Black Metal acts. I am sure they love their forests, but they, however, do not embrace them for romantic walks in the night. The ‘blackened’ in the title refers to the wildfires that destroyed so many acres of precious North American forests, these six songs are dedicated to those forests destroyed.

Lolth is opening the split EP with three tracks, including one intro, of rather sharp sounding Black Metal. Due to the atmospheric character and a clear emphasis on the bleak sounding riffs it sounds rather Scandinavian to me. The dynamic drums also contribute to the energetic feel of the tracks. And, if my ear aren’t fooling me, these drums are actual, real, drums, which is by far not always the case with solo projects. Speaking of dynamics, I love the Spanish guitar in the start of ‘Remnant Shade’, which, by the way, is interrupted quite abruptly by a sharply deployed riff. The stripped down and minimalistic production rounds off the cold atmosphere that clearly was intended. A nice 3-track set of a charming project that I will be keeping an eye on.

The other side is for Bloodfeather, also presenting three tracks. Though it is not really unique to be environmentally minded in the (Black) Metal scene these days, it is still not quite common either. Regardless of your own opinions on the matter, it is quite refreshing to encounter an act that has something to say other than the usual total misanthropy or Satan worshipping. Okay, on to the music then. Compared to Lolth, Bloodfeather sounds warmer, yet not less sharp. The music is forged out standard instruments, but sounds really organic, while it maintains its strong Black Metal core. In fact, it reminds me of a slightly sharper Drudkh, with a similar hypnotizing approach to the genre. It employs the same kind of dynamics with enchanting ambiental passages and more up-tempo blazing Black Metal. I am truly quite impressed.

For now this split EP is only made available digitally, but I do hope that Cult Of Oblivion Recordings (run by Lolth) is considering doing a run on cassette tape, as these tracks certainly deserve a release on physical format.