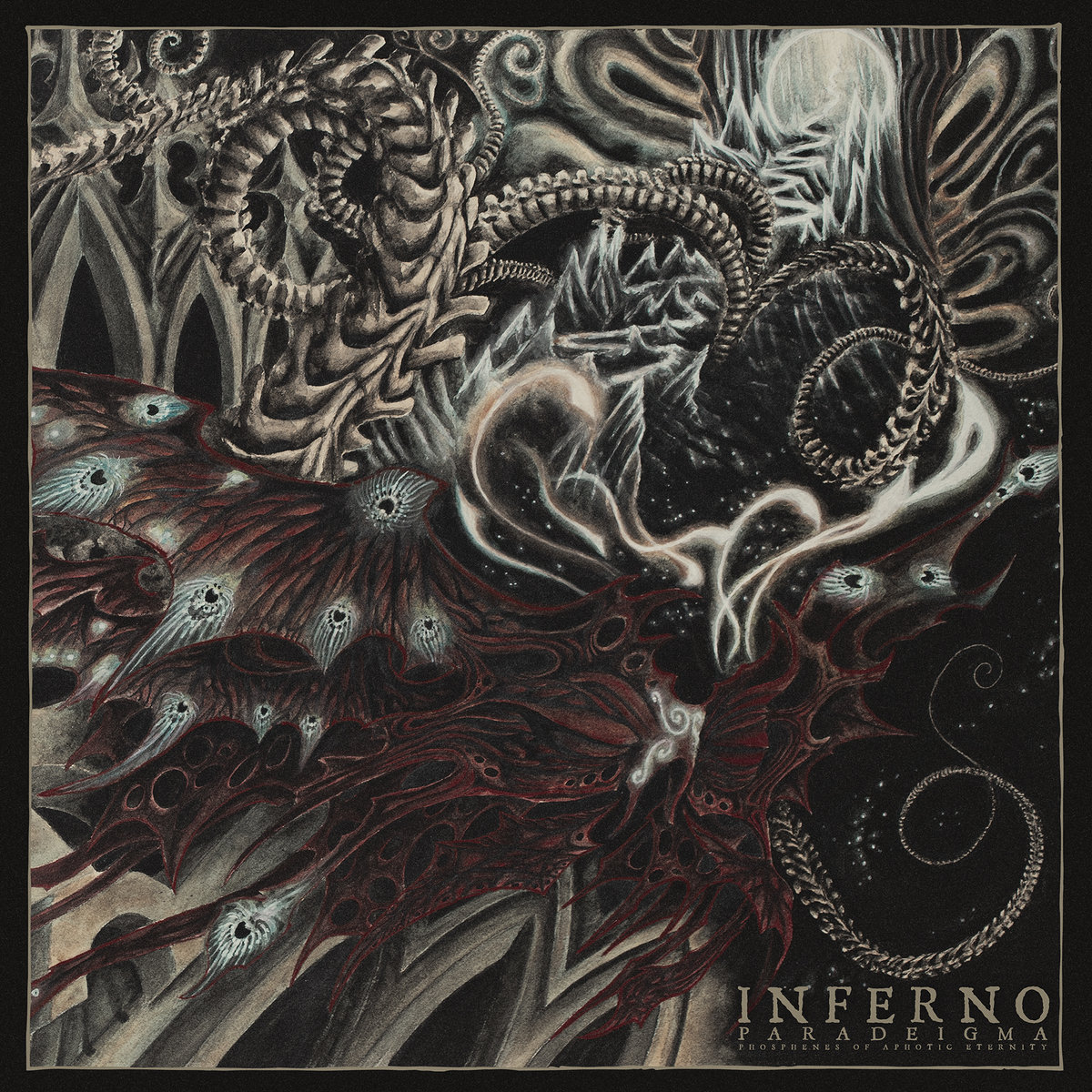 Those only familiar with the earliest Inferno albums might be surprised at how the band sounds anno 2021. The Czechs released numerous albums since its inception in 1996 playing Norwegian Black Metal, which culminated in probably their best traditional album, 2009’s `Black Devotion’. Perhaps it was because only vocalist Adramalech remained from the original lineup, but on the subsequent album `Omniabsence Filled by His Greatness’ the band showed they had developed their sound quite a bit, adding great depths of trance-inducing atmosphere through repetitive fast-paced drums with flowing guitar structures, esoteric ambient passages and much more diverse song structures. The album, released by Agonia, seemed to receive little attention, but the new sound was brought to a wider audience by the follow-up record. Now signed by W.T.C. Productions, `Gnosis Kardias (Of Transcension and Involution)’ showed an even more experimental side of the band. Now for the third time on a new label, Debemur Morti presents us with `Paradeigma (Phosphenes of Aphotic Eternity)’.

Probably the clearest difference compared to the previous album is the production, which is more muffled, bass heavy and suffocating as opposed to the rather shrill sound of the predecessor. This is also reflected in the vocals, which are more guttural and lean more towards growls than screams. At times the tracks on `Gnosis Kardias (Of Transcension and Involution)’ really got under your skin with dissonant riffs, whereas `Paradeigma (Phosphenes of Aphotic Eternity)’ feels more like a raging river that drags you along helplessly; even when the river slows down and you may think you can escape, it sucks you right back in. The music is more organic, and to me feels closest to `Omniabsence Filled by His Greatness’ but much more refined. Over the last few albums the band has been honing their skills within the newfound style, which results in a much richer and sophisticated sound that unfolds upon multiple listens. Perhaps it’s best explained through the example of ‘Descent into Hell of the Future’, where an eerie calm start swells through layered passages and dynamic drum rhythms, then quickens pace until the tension finally culminates into a fast outburst, only to start over again. Similarly, `Ekstasis of the Continuum’ is an equally haunting experience whereas the album apotheosis `Stars Within and Stars Without Projected into the Matrix of Time’ continuously changes rhythm and pace. Considering the complexity of the material it’s surprising how easy it is to listen to the album, yet it takes multiple listens to hear all the layers and details that are hidden behind pretty much every passage. Inferno take their sound another step further on `Paradeigma (Phosphenes of Aphotic Eternity)’, creating a fascinating journey to those willing to invest the time in it to absorb all the details.