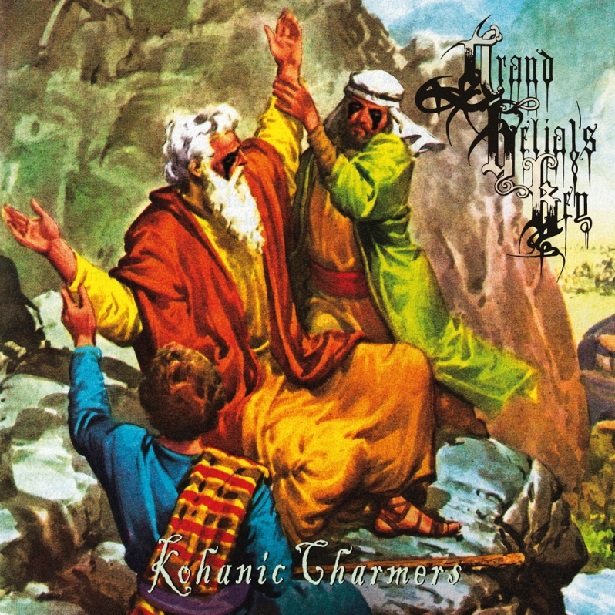 Vocalist Grimnir Heretik (Richard Mills), who died of an overdose in 2006, abruptly ended Grand Belial’s Key after fourteen years – a band much talked and written about. At that time, the band’s musical legacy consisted of three albums and a handful of (split) EPs and demos. Now, seventeen years after their last feat ‘Kosherat’ (2015, Drakkar Productions), the band is back with their fourth album: ‘Kohanic Charmers’.

Besides the veterans Gelal Necrosodomy (guitars) and Demonic (bass), this 2009 reincarnation of the band consists of two new faces, at least for the band: Ulfhedinn on drums and Sven ‘Unhold’ Zimper on vocals. Since these two gentlemen have their own musical track records in various other bands, one wonders how the unique Grand Belial’s Key sound has developed.

Despite the fact that the Grand Belial’s Key has been active since 2009, this is the first time we get to listen to this line-up. Fans of the band’s earlier work can rest assured that nothing really has changed. The authentic trademark sound is still very much there: genuinely creative with Heavy Metal-laced lead guitars on a firm foundation of fairly basic mid-tempo Black Metal riffs and drums. It also has a little cleaner (or less dense, if you will) sound that allows the instruments to stand out a bit better than before – perhaps sacrificing a bit on atmosphere because of this, but that wasn’t much of their core business to begin with. The dynamic and varied songs and the creativity of Gelal Necrosodomy as a guitarist remain unmatched in this genre – there are no bands that have been able to reproduce this in a similar way. The main difference between this ‘Kohanic Charmers’ and the previous albums is mainly in the vocals of Unhold, who displays a more barking and traditional Black Metal voice – something that actually suits the band well and with which he certainly adds something to the new identity of the band.

With this new and stable line-up, the band delivers a good album that fits nicely into the band’s chronology – a perfect follow-up to ‘Kosherat’. Also, the fact that the band is no longer dependent on third parties for the release of this album (which tended to be a problem for certain releases in the past), but has it in their own hands with Gelal Necrosodomy’s own label, will contribute to a renewed stable future for Grand Belial’s Key.