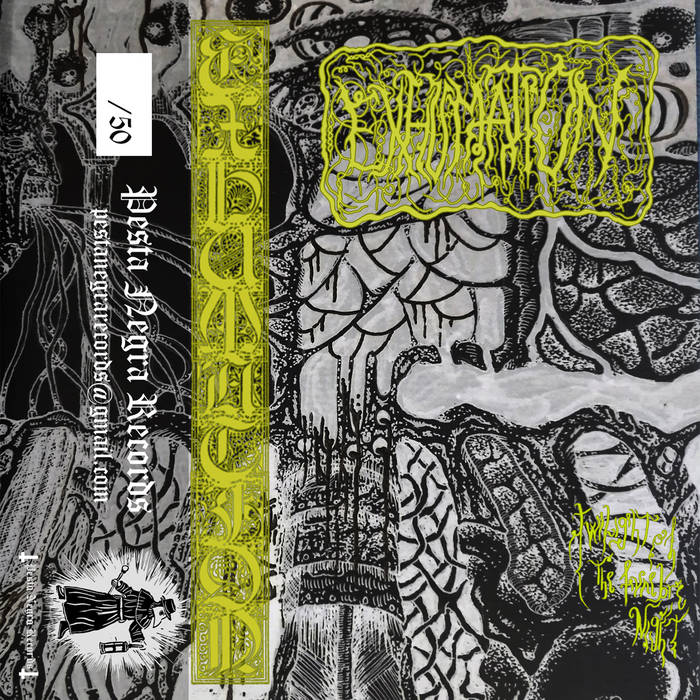 For many listening to a Funeral Doom Metal record is, and fair enough, a gruelling ride; it may even seem a form of self-flagellation. To fully grasp the painfully slow music, it requires certain perseverance and a considerably trained ear. But, once you’ve passed the point that the music doesn’t scare you away any longer, the beauty unfolds.

‘Twilight Of The Funebre Night’ is the debut demo tape of this Spanish one-man act of Marc Rodriguez, who is active in a couple of underground bands as well as being the live drummer for Spanish underground Death Metal specialists Graveyard. With Exhumation Marc explores the bleak side of life and loses himself in the deepest and darkest of Doom Metal’s deepest and darkest abyss: Funeral Doom.

The Funeral Doom genre is not the genre that is most suitable for adventurous experiments, more often than not the melancholic genre lacks originality, but in fact that can be considered as a plus. With Exhumation, Marc treads the same paths as Thergothon, Pantheïst and Skepticism. The slow pace, the heavily tuned guitars (comparable to Evoken in tone), the gloomy plucking and the organs added here and there sound familiar (Pantheïst). The production is actually quite good, clean enough to reflect each detail but heavy enough to enhance the sound of the guitars. Also the extremely heavy (and slightly distorted?) vocals and the background chanting both get a prominent place in the mix, which results in a very dark feel.

Exhumation added every single needed ingredient to get to a very heavy Funeral Doom release. Played a little bit on the safe side maybe, but considering this is only Marc’s first attempt with Exhumation, ‘Twilight Of The Funebre Night’ turned out to be quite a promising demo tape.